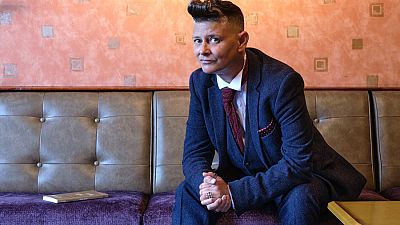 Legendary spoken-word poet Joelle Taylor has won the TS Eliot Prize for her book “C+nto & Othered Poems,” in what she described as “a triumphant moment of visibility for butch women.”

Taylor’s collection, which details her experiences of rejection by a conventional family and coming-of-age in Soho’s lesbian club scene, has been lauded for its emotive documentation of an often overlooked subculture.

Upon earning the £25,000 prize money, Taylor’s book was described as “a blazing book of rage and light,” by judges.

Former winners of the TS Eliot award include Ted Hughes and Carol Ann Duffy and it is considered one of the most prestigious in the industry, with Taylor herself saying that it is the prize “all poets want to win.”

On Taylor’s win, Chair Glyn Maxwell said, “Every book on the shortlist had a strong claim on the award. We found it extremely hard to choose between ten superb collections.”

“The arguments towards the end were passionate and thoughtful, but the choice of the judging panel is Joelle Taylor’s C+nto and Othered Poems…a grand opera of liberation from the shadows of indifference and oppression.”

Taylor is a former UK slam champion, who founded the UK’s youth slam championships, SLAMbassadors, in 2001. She was also heavily involved in Borderlines, a project that brought together young poets from across Europe on the eve of Brexit.

Her work is characterised by powerful feminist messaging which runs through all her collections. In “Songs My Enemy Taught Me”, Taylor’s third collection, the poet explores her own experiences of childhood abuse and amplifies the voices of survivors around the world.

Her earlier works “Ska Tissue” and “the Woman Who Was Not There” are equally gritty, and encapsulate the artist’s raw, emotional style.

Writing in the Independent, Taylor said that her win was a “game-changer” for butch women and those from working-class backgrounds.

Amidst a time of division for the LGBT+ community, Taylor called for unity in the face of discriminatory policies in Poland and Chechnya. Unity which she believes can be achieved through remembering the women highlighted in her poetry.

“Butch dykes are targets across the world for violence, corrective rape and murder. We face threats from the outside and division within. But if we recall these brave women and the sacrifices they have made to become, to be alive, then I believe we have a chance of unifying.”

Which European nations are cracking down on their cultural sectors?

From the old to the new: remembering jazz giant Pharoah Sanders