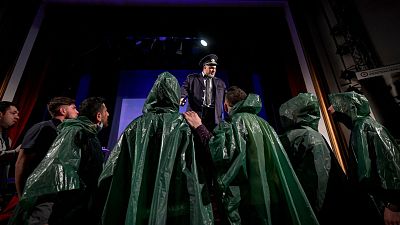 The 'Liberation through Culture' festival is a chance for inmates to express their creativity   -   Copyright  AP
By Theo Farrant  with AP  •  Updated: 02/12/2021

For the past 12 years at the end of the autumn, a drama festival organised by the National Penitentiary Administration of Romania has given prisoners the opportunity to appear in theater productions overseen by professional directors.

The festival which takes place at the famous Bucharest Nottara Theatre, aims to combat prejudice and allow inmates to have contact with the public.

About 700 prisoners have taken part in performances at the event over the years.

This year, inmates from Jilava and Rahova prisons are performing for very small audience due to the pandemic.

Planting the seed of reintegration into society

Rehearsals take place in the prison with the last one being organised on the real stage.

"I consider that all of us go through very difficult moments in our lives now due to this pandemic. This theatre play gave us change," says Marin Florin, inmate at the prison of Jilava.

"It was bit difficult for us at the beginning because we didn't know how to act, how it works on the stage, how it's going to be, if we're going to be nervous or not, but in the end, the emotions passed away slowly,"

The theatrical experience is a kind of therapy for the inmate actors, designed to help them rediscover themselves and better understand each other.

"(Acting) is like climbing a ladder, the higher you climb, the better you become, you feel different things, you discover other things, you learn new things," says Viorel, an inmate at the prison of Rahova.

"Their transformation takes place step by step, and they will realise in five-six month that this exercise they did during this (rehearsal) period of a few months changed them and that they should not go back to old habits," says Iulian Gliță, the theatre director of this years performances.

After the curtain has come down, there are prison vehicles waiting to take the actors back to continue serving their sentences.

"This is all up to them," she continues.

"We come with all the support, and I believe that every human has the chance and joy to become whatever he wants if he really wants to and if he really works in that direction."

Check out the video above to see the inmates take the stage for this year's show.