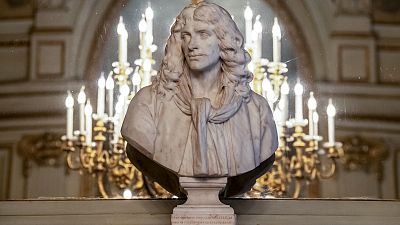 This photograph taken on December 14, 2021 shows the bust of French playwright Moliere, at the Comedie Francaise, national theatre, in Paris.   -   Copyright  BERTRAND GUAY / AFP
By Euronews  with AFP  •  Updated: 10/01/2022

The world of theatre will celebrate the 400th anniversary of Molière's birth on January 15, a French playwright, actor, and poet, widely regarded as one of the greatest writers in the French language and indeed, world literature.

Molière penned a large body of plays that have survived the centuries and become classics.

At the Lycée Montaigne in Paris, students are performing excerpts from his plays in a show highlighting violence against women.

With excerpts from Tartuffe, The School for Wives, and a comedy-ballet, the show celebrates Molière's birth.

In 'The School for Wives', the French playwright denounced the power of men, but also their fear of women through comedy and farce.

The play, which speaks frankly of the husband's fear of adultery, was a huge success at the time.

"Molière created many characters who were very modern. In his time, it was very badly seen. But now, when you reread the plays, when you see the shows and everything, you understand that it goes so much further and that in fact he had imagined characters who were much stronger and who would have a much stronger impact later on," said final year student Hannah Bendel.

Molière had a very strong vision of women's freedom.

Indeed, Molière's women know how to take advantage of situations, with a great deal of freedom and modernity for the time.

"Molière had a very strong vision of women's freedom. He has a way of speaking about it which is very singular so it was very interesting with all that's happening, in the current climate with #MeToo, etc. It was very interesting to make a parallel and to see all the modernity of Molière's thought 400 years ago, to see how much it speaks to us today."

On this significant anniversary, numerous demonstrations and tributes to the great man will take place across France and throughout Europe.