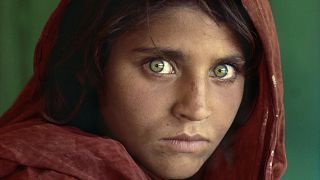 We are bombarded with affecting images of world events all the time, but few have had the same kind of influence of Steve McCurry's 'Afghan girl'.

Taken in 1984, the photo later featured on a world-famous cover of National Geographic magazine.

The photograph of Sharbat Gula, a young Afghan refugee with piercing green eyes has become one of the most distinctive in photographic history.

This image and more than 150 others from McCurry are now on display at Paris' Musée Maillol.

'The World of Steve McCurry' documents a the world's largest retrospective on his groundbreaking works spanning multiple continents and decades.

Composed of iconic photographs and new unpublished works, McCurry’s images are known for their humanity, dignity, compassion, elegance, and proportion.

The exhibition, designed by Biba Giacchetti, takes us on a long journey from Afghanistan to Southeast Asia and from Africa to Latin America.

This vast and fascinating body of work always retains the human element that made his celebrated image of the 'Afghan Girl' so powerful.

Check out the video above for a glimpse at the new exhibition.

Who was honoured at the 2022 Royal Society Photography Awards?