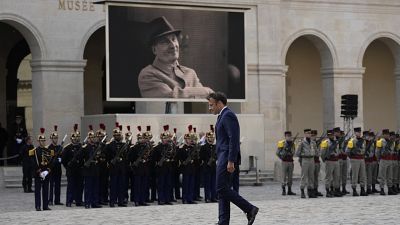 A mainstay of the French theatre, a national tribute was paid to the actor in Les Invalides courtyard in Paris.

The ceremony was attended by many big names, including none-other than France’s President Emmanuel Macron. Macron paid tribute to the actor.

“It’s a sacred monster who has just left us,” the President said.

"For seven decades, Michel Bouquet brought theatre and cinema to the highest degree of incandescence and truth, showing man in all his contradictions, with an intensity that burned the boards and burst the screen," Macron posted to his Twitter account.

Why was Bouquet so important?

It’s a rare honour to have the President pay tribute after an actor’s death.

Most recently, Macron made a speech at the tribute for Jean Paul Belmondo, the actor who was perhaps best known for starring in Breathless, Jean Luc Godard’s first feature film and for many, the start of the French New Wave era of cinema.

For those who haven’t heard of Michel Bouquet, here’s why his death signifies a great loss to French theatre and film.

Born in 1925 to a non-acting family, aged fifteen he knocked on the door of a French actor and demanded to be trained.

He won two César Awards for best actor in “How I Killed My Father” and “The Last Mitterrand”, Bouquet was an esteemed film actor, starring in over 100 films.

But his greatest achievements were largely in theatre. An adherent to the power of the text in theatre, he played the lead in Eugene Ionesco’s absurdist drama “Exit the King” over 800 times between 1994 and 2014.

He claimed he could do another 800 performances and still find something new in the text each time.

Bouquet also was instrumental in bringing the works of English dramatist Harold Pinter to France.

Following in the tradition of the Irish playwright Samuel Beckett, whose works were often first performed in France, Pinter’s works contained similarly sparse language and are filled with pauses. These are elemental of a style that’s known as “Pinteresque”.

Bouquet alongside playwright Jean Anouilh popularised many of Pinter’s greatest works in France, including “The Collection”, “The Birthday Party”, and “No Man’s Land”.

In 1998, he received the Molière Award, France’s highest theatre honour, for playing Potier in “Les Côtelettes”.

He won a second Molière for his performances of “Exit the King” in 2005.

In 2018, France bestowed its highest honour on Bouquet when he was given the Grand Cross of the Legion of Honour.

The level of honour that Bouquet has received is also in part due to France’s high esteem for the arts. With actors and writers held in high regard for their contribution to French society, it was impossible for one of the country’s greatest stage actors not to receive a grand tribute.