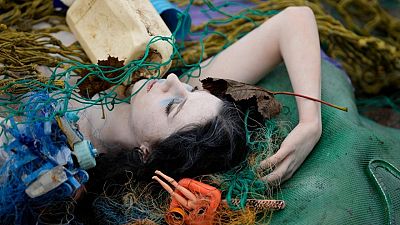 At the eleventh hour, governments around the world have been moved by the efforts of scientists, civil society and public opinion to make, what are arguably, substantial commitments to reduce humanity’s carbon footprint.

Deals announced during this autumn’s COP26 climate summit in Glasgow included over 100 countries agreeing to end deforestation by 2030, and a similar number of nations committing to a 30% reduction in methane emissions by 2030.

Even so, the trailblazing campaigner Greta Thunberg was unimpressed, pointedly describing the summit as a “failure”.

Thunberg’s dismay over the political proposals, which she argues are nowhere near drastic enough, will perhaps be shared by other activists and creatives who are well aware of how long ideas about the need for change have been in circulation.

How visual art reveals the true urgency of the climate crisis

Visual art has its own longstanding relationship with environmental engagement.

Over the last half century or more, numerous artists such as Gustav Metzger, Agnes Denes, Lothar Baumgarten, Edward Burtynsky, Chris Jordan, and Olafur Eliasson have created work that has focused attention on humanity’s destructive behaviour and its impact on the environment.

In recent years, the interventions of individual pioneers have been joined by more systemic undertakings, with institutions and galleries both programming environmental content and looking at ways to minimise their own carbon footprint.

While environmental awareness within art feels more pronounced than ever before, this industry-wide awakening spans more than a decade, with occasional peaks of intensity along the way.

In 2009, for example, Gustav Metzger’s 'Flailing Trees' installation was commissioned as part of the Manchester International Festival, and installed outside the city’s Whitworth Gallery, where it is now part of the permanent collection.

Consisting of 21 upended willow trees, standing tall with their tips implanted in concrete, roots projected skywards, the piece is a protest against humanity’s planet-wide destruction.

The Serpentine Gallery also staged a retrospective exhibition celebrating Metzerg’s career, followed by a two-day conference in early 2010, which was organised in collaboration with the veteran artist and titled 'Mass Extinction Conference: A Call to Act'.

Around the same time in London, the Royal Academy (RA) staged its large thematic exhibition 'GSK Contemporary: eARTh: art in a changing world'. Alongside work by contemporary artists such as Mona Hatoum and Cornelia Parker, the exhibition provided a scientifically grounded overview of the warming world. It did not, though, seek to preach to its audience.

At the time of the exhibition, the RA’s then Director of Exhibitions, Kathleen Soriano, noted that, “The show was not set up as a call to arms… Any role that the art could play in relation to changing people’s minds was to be subliminal."

The artists and institutions bringing environmental awareness to 2022

Over the past decade, artists, curators and institutions have collectively become more vocal in pushing the urgency of addressing the climate crisis.

In the RA’s 2019/2020 exhibition, 'Eco-Visionaries: Confronting a planet in a state of emergency', the institution’s website stated clearly that the work on show was “a wake-up call, urging us to acknowledge and become conscious of our impact on our environment.”

Moving into 2022, exhibitions across Europe will continue to show how artists are increasingly using climate change and the environment as a key reference point in their practice.

Among the institutions showcasing environmentally-conscious work will be London’s Wellcome Collection, with its exhibition ‘Rooted Beings’ (24 February - 29 August 2022); Kyiv’s PinchukArtCentre with its exhibition ‘Less Human’ (May-August 2022) asking, “Are we becoming ‘less human’ in a world of climate crisis?”; and the Espoo Museum of Modern Art (EMMA) in Helsinki with ‘In Search of the Present’ (24 August 2022 - 5 February 2023), an exhibition that will “turn to artists as we search for new ways to consider humankind and navigate the challenges of today…”.

As its association with Gustav Metzger suggests, the Serpentine in London is one organisation that has a track record of connecting art and the environment. Since 2018, its engagement has been deeply rooted in the form of its General Ecology initiative — “a strategic effort to embed environmental subjects and methods throughout the Galleries’ outputs, structures and networks.”

Concerned with topics such as more-than-humanism and climate justice, much of the focus of General Ecology from 2020 through to 2022 has been placed on 'Back to Earth', the Serpentine’s 50th anniversary project, which is dedicated to the environment.

The founder of General Ecology, Lucia Pietroiusti, explained to Euronews that her starting point back in 2018 was to formulate how an organisation, “could dedicate itself to its own discipline, in this case contemporary art, but also to environmental justice and balance.”

Pietroiusti’s solution was to look “simultaneously at public outreach, programming” and curatorial direction, as well as “infrastructure and on the ground questions.”

I would say there is an enormous amount of artists who are working on ecological and environmental topics.

Having worked at the Serpentine since 2011, Pietroiusti also instigated a formal switch in her own job description from Curator of Public Programmes to Curator of General Ecology. Pietroiusti says that General Ecology has since progressed by “starting to programme consistently and repeatedly along the lines of a very broad understanding of ecology and the environment.”

When programming such content, the Serpentine is able to tap into an expanding pool of awareness across the art world.

In the case of 'Back to Earth', Pietroiusti says that ”the groundswell of involvement and investment of the art field in environmental questions” entailed that the Serpentine should celebrate its 50th anniversary by “taking responsibility” for the future, rather than looking backwards.

That vision has led to the organisation working with around 65 artists to develop works that simultaneously function as environmental campaigns, initiatives, prototypes or interventions.

In 2022, 'Back to Earth' activities will include a flagship exhibition, scheduled, “Covid-permitting”, for the summer, as well projects taking place on Earth Day (22 April) and ongoing engagement during the UK’s presidency of COP, which continues until the start of COP27, set to be held in Egypt in November 2022.

Those looking, optimistically, at the deals recently made in Glasgow have expressed hope that they are a “starting point” for more substantial action in Egypt.

In the meantime, the art world will continue to beat the drum for change.

Hearing colours, sensing time: a day in the life of a cyborg artist