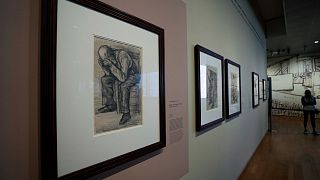 Breakups are never easy, which is why we were all saddened when the Metropolitan Museum of Art and the Sackler family announced that their long-term relationship was coming to an end.

Or maybe we weren’t?

The Sacklers, who have donated millions to the Met over the years, are currently going through bankruptcy proceedings after their company, Purdue Pharma, pleaded guilty to criminal charges concerning their role in the opioid crisis ravaging America.

The charges – which included encouraging paying doctors through a speakers programme to increase painkiller prescriptions – sees the Sacklers on the hook to pay $8.3 billion (€7.4 billion) in forfeitures and fines.

To date the drug overdose crisis in America has cost 470,000 lives.

Nor is the Met the only cultural institution scrambling to get away from the Sacklers' shattered reputation. In recent years the Louvre, the Tate, and Berlin’s Jewish Museum have all distanced themselves from the now-controversial philanthropists.

While scandals often have us asking whether we can separate the art from the artist, should these developments encourage us to ask how to separate artists from their sponsors?

Opioid addiction and public health are by no means the only crisis overshadowing museums and galleries, as it turns out that sponsors with deep pockets may have gotten their money through less-than-reputable means.

Recent news that the Science Museum, London, had chosen a fossil fuel company to sponsor their climate show was greeted with dismay, culminating in youth climate activists occupying the building overnight.

“If you display or show the BP or Shell logo in an exhibit you are helping to better their brand and give them social legitimacy,” says Chris Garrard, founder of Culture Unstained an organisation which supported the protestors.

Rather than good-natured philanthropy, Garrard believes that donations from fossil fuel companies are a way of reorienting their public image, a practice known as ‘artwashing’.

“These sponsorships are transactional and they are buying that good reputation,” says Garrard.

Cultural institutions are often seen as a neutral space, places which passively display art or science exhibits, but Garrard sees them more as a discursive space, which can be instrumental in changing public perception of polluting companies.

“These partnerships don’t take place in a vacuum; they are endorsing these companies,” says Garrard.

“We have witnessed a shift (…) where we look to cultural institutions to show leadership in these issues.”

Artwashing is nothing new, as evidenced by the Sackler’s sponsorship of the Met from the 1970s.

However, while reputations may have been easily laundered at one time, the practice doesn’t stand much scrutiny in the present day.

“Galleries are brands…and you don’t have to dig deep before you find contradictions,” says Paul Springer, director of the School of Communication at Falmouth University.

“Social media provides a platform for people who question and challenge the facts as they are presented. There is a greater questioning of motives now.”

Nor is the issue just with the viewing public. In 2019, the National Portrait Gallery, London, was faced with problems when artist Gary Hulme led a call for them to divest from fossil fuel funding. Springer cites how artists themselves are savvy about associating themselves with galleries or awards which could damage their brands.

“They have always been aware of where to show and where not to show and questioning more on which funders they would be prepared to be involved with," he says.

In an age where such events can be ruinous for anyone connected, it makes more sense for everyone involved not to risk it.

“The values at the moment carry more weight than the cash,” says Springer.

“Some places are selective; they wouldn’t bring in brands that will clash with their ideology.”

Sponsorship-scandals also cost financially, with some collectors not wishing to exhibit their work at all in case contentious sponsorship and protests become part of the art’s wider story and damage it’s value.

“The whole movement of art is more cautious - there is a lot more to it. There is more reluctance to send work to exhibitions where it might cause controversy.”

While fossil fuel sponsorship hasn’t completely vanished (BP are currently sponsoring the new Stonehenge exhibit at the British Museum) it has clearly dropped.

Faced with a climate-conscious public and vocal social media critics, we may soon be seeing the museum-sponsor divorce rate dramatically increase.