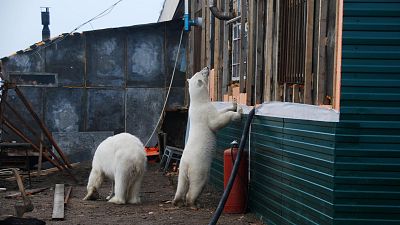 Seeing a polar bear on the outskirts of a village is almost commonplace for the residents of Chukotka Ryrkaipiy, on the shores of the Arctic Ocean.

In recent years, animals appear there every winter in search of food. Climate change is warming the region, leading to late formation of ice cover and early ice melt. Though polar bears normally hunt sea animals living on ice floes, now they are being forced to find food on the coast instead.

"Since 2000, in Chukotka, there has been an increase in the number of bears. They come into villages, sometimes up to a dozen, looking for food. This is due to climate change," says Yegor Vereshchagin, deputy head of the Department of Industrial and Agricultural Policy of the Chukotka AO.

This warming causes migration - and animals find themselves ever closer to human habitats.

"In the autumn, bears traverse the route by water. During autumn storms, for example, cubs can get lost and go towards people," Vereshchagin explained during a press conference last week.

Incidents of bears coming towards people are becoming so common that they are increasingly likely to be caught on camera. A video made by WWF volunteers and supported by the environmental initiative, Bear Patrol, shows bears strolling in front of buildings and industrial pipes - just a few hundred metres away from a populated area.

According to the Bear Patrol, 61 bears wandered into Ryrkaipi last December due to unusually warm weather for this period. If the ice were strong enough, the animals would have already gone out to sea to hunt seals and other creatures. But because of the warming weather, they can't do that.

"Almost all the bears are thin. There are both adult and young animals among them, and there are females with cubs of different ages," Bear Patrol leader Tatiana Minenko explains.

Danger for both humans and bears

An encounter between a human and a polar bear usually causes problems for both sides, environmentalists say. To help the animals and protect humans, a group of volunteers from Arctic villages patrol the area. They chase away adult bears and pick up cubs that have broken away from their mothers.

"People stay at home in the evenings to avoid encountering bears and the volunteers patrol the settlement on snowmobiles," Minenko explains.

People stay at home in the evenings to avoid encountering bears and the volunteers patrol the settlement on snowmobiles.

Over the past two years, the Federal Service for Supervision of Natural Resources has recorded 13 cases of polar bears interacting with humans. As a result, three bears died, three were removed from the wild and in just seven cases, the animals escaped.

In addition to the natural danger of encountering a wild animal that is no longer afraid of humans, there is the problem of survival for the bears themselves. Most importantly, the cubs have to spend the first two years of their lives close to their mother. Experts also warn against removing the bears from their natural environment.

"They are very plastic: you can train them to open their mouths on command in a few hours. For a bear, learning to interact with humans is not a problem. But the situation with physiological adaptation is quite different," says Irina Voshchanova, a researcher at the Moscow Zoo.

The older a bear is, the more complex its survival skills are in its natural environment.

"The older a bear is, the more complex its survival skills are in its natural environment. By removing it, we put the animal in a cramped, poor environment where all its skills prove ineffective," she explains.

Experts believe that in order to keep bears away from populated areas, it is necessary to manage and get rid of landfills and to inform the population about safety procedures for interacting with wild animals.

The biggest problem is people feeding the bears

Experts have been searching for a solution to the polar bear problem for a long time. The main point they all agree on is the need to stop bears from eating food they can't find in the wild.

"The biggest problem is feeding. A little bear cub comes up, you feel sorry for him, you want to feed him, but human food is a death sentence for him," explains Arctic species coordinator for WWF Russia Varvara Semenova.

"This bear cub will eat human food, grow up, grow strong and will chase humans and beg for food, and the outcome in such situations is the shooting of the animal."

The organisation believes that the solution to this problem could be the creation of natural feeding points using food left behind by walruses - the other inhabitants of the region.

"We recently managed to keep the bear cub on natural food. The patrolmen from Bear Patrol helped it to eat natural food, protected it, and after a few months this bear left and was able to hunt on its own," says Semenova.

The experts don't have enough information yet to give an assessment of their plan, but the first results are promising.

"For the first time it became a question - maybe in this way a significant number [of bears] can adapt to nature?" says Semenova.

And after the experiment, WWF plans to "create natural rehabilitation sites."

"This is a new topic for us. Its success is still under discussion," she explains.