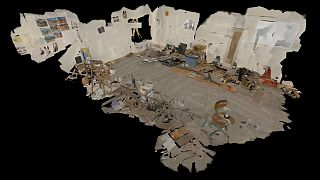 When COVID-19 lockdowns descended and art audiences were left to hibernate behind their computer screens, many institutions and galleries quickly moved to increase their output of remotely accessible digital content.

Within that digital upturn, video art found a happy role as a medium that was already designed to be accessed on screens and was ready and waiting to be piped into homes around the world.

Just as lovers of paintings were eager to return to galleries to see canvas in the flesh, though, the shareability of video work belied the fact that it is also a medium that thrives on physical, real world presentation.

While the ongoing pandemic and emergence of new variants mean all statements about physical openings remain tainted by a lingering uncertainty, there is hope that audiences across Europe will be returning in 2022 to view video art in more immersive scenarios than their living rooms, bedrooms and home offices.

Venice shaping up to be video art hub

All being well, it should be a prominent year for the medium, not least because many of the national pavilions planned for the 2022 Venice Biennale (23 April to 21 November 2022) - the art world’s most high profile repeat event - will feature projects by artists who specialise in video-based work and installations.

Visitors to Venice can already enjoy the long-running exhibition “Bruce Nauman: Contrapposto Studies” at the Punta della Dogana museum (until 27/11/2022), which features a number of new video works by the American trailblazer.

With that show running through to the end of the Biennale, the addition of new video works across national pavilions and other Biennale project spaces will place Venice front and centre for those looking to experience the best the medium currently has to offer.

Beyond Venice, a series of video-focused events and festivals will keep a spotlight on the medium from early 2022 onwards.

From 10-13 February, the Art Rotterdam art fair will return to the imposing Van Nelle Fabriek building with presentations by over 100 Dutch and international galleries, as well as special projects and exhibitions.

Included in the programme will be the Projections video section, a notable feature of the fair that has helped to give it a unique identity over the last decade.

Whereas Projections has previously been staged within a dedicated, atmospherically darkened space, the featured videos will now be shown in the main section of the fair, in extended sections of the stands for the relevant galleries.

Floor Wullems, the director of the participating Annet Gelink Gallery, welcomes the inclusion of Projections within the stands, telling Euronews that it is a “good step” that will make it easier for the gallery team to connect with visitors to the fair.

The gallery will present the 2021 video work ‘Constant Companion’ by the Amsterdam and Brussel-based artist Minne Kersten. Noting that Art Rotterdam is an ideal place to show work by young, emerging artists like Kersten, because it attracts “curious collectors who want to discover new talents and new approaches”, Wullems adds that, “Projections absolutely adds an extra element to the fair, since video at fairs is something you usually don’t see much.”

While the inclusion of Projections undoubtedly adds a dramatic and engrossing element to Art Rotterdam, though, one reason it is somewhat unusual in championing video art is that it can still be regarded as a difficult sell.

“The interest in collecting video art has certainly increased in the last ten years. Although 90% of those that buy video art are collections shown to the public. Museums, but also private collections that are displayed in museums, or collectors who regularly open their homes to the public, for example during art fairs. Closed private collections are still not an important part of the market for video art. But Projections is not only about direct sales. The galleries often present video in Projections to show an artist’s full practice, which reflects on the more sellable works of the same artist in the booth at the fair.”

Wullems concurs with that view, saying that while “the current art market is painting oriented” the gallery encourages “initiatives like Projections to put more emphasis on video. The appreciation for video is rather steady, it has always been a more difficult medium to show and sell, but luckily we still manage to do so, mainly to museums and larger private collections.”

The winter staging of Projections on the edge of the North Sea will be followed in May by two dedicated video art festivals, one taking place further north in Turku, on the coast of southwest Finland, and the other far to the south in Split on Croatia’s Adriatic coast.

First launched in 2016, the Video Art Festival Turku (VAFT) returns from 19-22 May 2022 at indoor and outdoor venues around the city, from traditional cinemas to theatres, bars, cafes and small businesses.

With VAFT’s director, Rose Pietola, noting that the festival “received more than 500 videos from 77 different countries” in an open call for entries, the Helsinki-based multidisciplinary artist Sasha Huber has been tasked with acting as juror to make the final selection.

Pietola says that from the hundreds of submissions some of the ‘big themes” to emerge were things “like nature and the environment, feminism, and life during lockdown and the pandemic.” Although, Pietola adds, “Of course, we don't know yet what themes the juror wants to show. That is very exciting!”

Alongside the programme Huber selects, Pietola hopes a key virtue of the 2022 edition will be the fact it is based around physical, communal screenings. As she says, “When experiencing art, I prefer to do it on-site with other people. And although video art is obviously easy to stream, I want to believe we can create safe ways to have live experiences.”

A few days after VAFT closes, the Split Videoart Festival will run from 26-29 May, with screenings in real world locations again an essential element of the event’s character. Projected onto the walls of Split’s Old Town, some screenings will take place in the ancient Diocletian’s Palace in the very heart of the city.

With Split’s historic architecture and waterside setting a magnet for tourists, producer Toma Šimundža says that, since its inception, the festival’s “first goal was to promote video art and artists in public spaces, connecting them with audiences from all over the world.” Šimundža adds that now is a good time for that type of exposure, with interest in video art “increasing in the region as well as in the rest of the world” and that the inclusion of the medium in other types of film festival proves that its influence is growing.

While audiences can now look forward to experiencing screenings of the latest video work in places like Rotterdam, Turku and Split - not to mention the creative installations planned for Venice - the flexibility of video means it will continue to be presented and shared in a range of ways in the months ahead.

One example of a clever use of video’s versatility will come with the spring 2022 release of ‘and suddenly it all blossoms’, a cinematic reimagining of the COVID-disrupted 2020 Riga International Biennial of Contemporary Art (RIBOCA2).

Directed by the biennial’s chief curator, Rebecca Lamarche-Vadel, and the Latvian film director Dāvis Sīmanis, the production features work by artists including Pawel Althamer, Bridget Polk, and Anastasia Sosunova installed on the former industrial biennial site in the Andrejsala area of Riga.

Touching on themes including precariousness and vulnerability, as well as rebirth and renewal, the film sweeps through the empty spaces of Andrejsala on a meditative path, providing a powerful reminder of video’s ability to bridge digital and physical realms.

A handy quality in uncertain times.