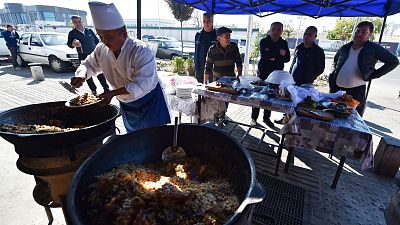 But this year, extreme weather has devastated this year's harvest.

According to the ‘plov index’, in the first nine months of this year the price of plov in Tashkent – the country's capital – rose by nearly 30 percent, due to steadily rising prices for meat and an explosion in carrot prices.

Plov is a key dish in the Uzbek cuisine. Though served all over central Asia, the dish is at the centre of the eating habits of the 35 million inhabitants of this Central Asian country.

At its most basic, you're served rice with onion and carrots, plus either lamb or beef, cooked slowly in layers.

In Tashkent, it is not hard to see where the demand for these carrots is. Restaurants with plov-heavy menus are dotted throughout the city, whose region is one of several that claim to make the best version of the dish.

Plov is served at weddings where ingredients are cooked in massive cast iron pots. The most skilled plov chefs, known as oshpaz, can serve plov for up to 1,000 people at a time.

Why has the price of plov gone up?

This year, an extraordinary drought devastated the farmers of Uzbekistan, causing the price of carrots to triple, thus driving up the cost of plov.

Uzbek farmer, Mukhtor Gazatov, who claims he lost a third of his annual income to the drought.

"This year the climate was very hot for carrots so the harvest was poor. As a result the price of carrots went up," he explains.

City temperatures surged past 40ºC in early June, a month when readings are typically in the mid-30s or lower.

Unseasonably cold weather earlier in the spring had already delayed the harvest and compromised its quality, causing carrots to crack.

Scientists link such shifting weather patterns and extreme temperatures to the effects of climate change.

Abdurahim Mirzayev, a 59-year-old career plov chef, said that he chose to sacrifice profits this year to ensure his rough-and-ready restaurant on the outskirts of Tashkent was full every lunchtime.

"You have to make plov with love and from a pure heart," Mirzayev said, his hands moving quickly through pockets of steam from the meat and vegetables sizzling in the pot.

Javokhir Djamoliddinov, Deputy Director of the National Statistics Committee that said he believes Uzbekistan will always find a way to serve its favourite dish.

He pointed hopefully to a recent dip in prices for carrots and government action to control food prices in general.

**Check out the video above to feast your eyes upon the glorious Uzbek dish. **