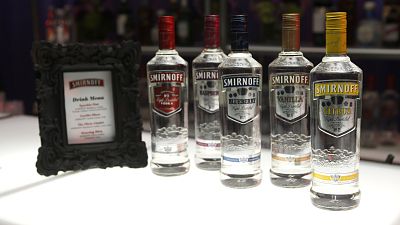 Russia is responsible for the creation of Smirnoff, Husky, and Beluga, to name a few   -   Copyright  Todd Williamson/Invision/AP
By Shannon McDonagh  & AP  •  Updated: 05/11/2021

This museum is perhaps one of the most extraordinary in Russia, because it's entirely dedicated to the country's most popular drink - vodka.

Located in the historic centre of St. Petersburg, the exhibition has taken people on the journey through the story of Russian vodka's cultural importance since 2008.

Its displays include shot glasses, one of Russia's biggest collections of unusual vodka bottles, posters and banners from Soviet advertising campaigns and ancient distillation equipment that was still being used during the Gorbachev era.

Vodka's rise in popularity and refinement

After starting off as a beverage mainly drunk by peasants in the medieval era, it became the favourite drink of the Russian tsars of the 19th Century.

"Many consider that Russian people are drunks, there is a stereotype that many people have an alcohol dependence, and this always has been the case," says museum guide Anastasiya Anufreykova.

"We would like to show in our museum that in fact, people drank culturally, and the culture of drinking was developed. People tried to drink beautifully, exquisitely. They didn't get wasted."

One of the most unusual exhibits is a large, heavy medal that would be hung around the neck to punish people who'd been drinking.

"Peter the Great tried to fight drinking (alcohol), and he invented various punishments for people. For instance, this is a medal for drinking: this was hung on the neck of drinkers for a week. It weighed quite a lot, about seven kg, and it was impossible to remove it.

"But after that period, people could come to a drinking establishment and get a free drink. We have this famous Russian gesture when we invite somebody to drink, thanks to this punishment," says Anufreykova.

Anufreykova points to the most expensive item in the museum, but it's not just the vodka that's a special vintage.

She says: "This is Beluga Epicure, created in collaboration with a French brand Lalique, and it costs 515,000 roubles (€6,200). The price is for a reason: the brand Lalique is very known, it made products made of crystal for royal families."

The museum's partner restaurant encourages you to pair vodka with food

The museum shares its home with a restaurant called Vodka Room Number One which serves up specialty vodkas with zakuski.

The most common zakuski spreads might feature a few simple items, such as herring, cheese, and bread, or more elaborate dishes that number 20 or more.

This a traditional buffet-style style spread of snacks on a table known as a zakusochnyi stol which was covered with a range of foods. The museum for Tatiana Ovchinnikova is a chance to relive her youth.

"As for the museum, I am from the Soviet era, and I have a lot of interesting things to look at here," she says.

"We were little, but they said that one rouble was enough to buy a bottle of vodka and a grilled cheese. Therefore, there is a rouble on display, and when you can see all this, I don't have an association with alcohol consumption, but with our childhood."

"I live in St Petersburg but have never been here. It's interesting to see what the museum of such a drink can offer to look at," says local resident Oksana Boyko.

The Russian Museum of Vodka is located in the St.Petersburg's Konnogvardeisky Boulevard. Tour and tasting tickets can be purchased for 500 rubles (€6), individual tickets without tour or tasting are 170 rubles (€2).