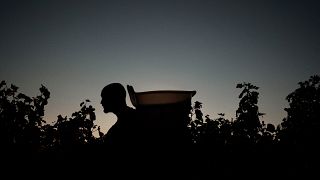 The vineyards of Burgundy have spoken. Rain, frost, hail, disease have all played their part in what will go down as a disastrous year.

The harvests confirm the bitter observation that this year, "everything has worked hard" to generate catastrophic losses of "up to 95%".

At the end of a plot located in the prestigious appellation of Pouilly-Fuissé, the trailer parked on the muddy path is struggling to fill up with clusters of Chardonnay. "In a normal year, it is full around 9:30 am," explains Julien Cheveau, co-manager of the estate which bears his family's name.

Today, as the midday break approaches for the pickers, the pile of white grapes still does not reach the top of the bucket.

"We sometimes do a whole row without having to empty the bucket," laments Aurélie Cheveau, Julien's sister-in-law and co-manager of the family estate of 20 hectares.

"We had the big frosts around April 7: down to minus 8 degrees. The vines finally recovered but we had a big hail on June 21, which destroyed all our hopes in 15 minutes. And the heavy rain in September put a lot of pressure on disease control. 2021 is the year when everything was fierce," summarises the winegrower.

"There really isn't much left. We're not going to be far from 95% losses in certain sectors," says the farmer, pointing her pruning shears by turns at vine leaves cut up by hail, and at shrunken bunches, where the beautiful shiny yellow of Chardonnay has in places given way to purplish berries covered with white hairs, betraying the rot caused by rain.

At the other end of Burgundy, the situation is not much better. "Here, I lost between 75 and 80%", estimates Ludivine Griveau, manager of the Hospices de Beaune, standing amongst half-full crates of pinot noir harvested on the prestigious hill of Corton (Côte d'Or ).

While, throughout France, wine production will fall by 29% compared to 2020, to stand at 33.3 million hectoliters, according to the Ministry of Agriculture, Burgundy as a region is more heavily affected than the average.

In this region, "the yields are historically low", estimates François Labet, president of the Interprofessional Bureau of Burgundy Wines (BIVB). We have generally between 30 and 50% losses but there are big differences, with 70 and 80% losses for the whites of the Côte de Beaune and -50% in the Chablis and the Mâconnais ".

The manager says "he does not know of a place that has escaped the frost" and expects a "shortage" for the 2021 vintage.

"We are going to make the smallest vintage that Burgundy has ever made", assures Thiébault Huber, president of the Confederation of appellations and winegrowers of Burgundy (CAVB).

But the quality could well come to compensate for the small quantity, hopes Eric Pilatte, independent wine expert, by evoking "the beautiful days since August 15th", which, before the rains, allowed a good maturation.

However, beyond this annus horribilis, it is the repetition of climatic disturbances that worries the profession.

"In 2019, we had half of the harvest, already because of the frost. If we have one in two years like that, we wonder what will become of our profession," worries Aurélie Cheveau.