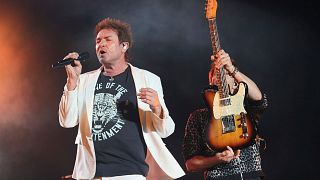 The 63-year-old rocker says the New Wave giants were able to order in an endless supply of substances whenever they stayed at famed West Hollywood hotspot, the Sunset Marquis.

Speaking to British comedian Alan Carr on his 'Life’s a Beach' podcast, Simon said: “I’ve been going to the Sunset Marquis for 40 years.

“When I first went there, it was not quite so high rent – it was much lower rent.

“You used to be able to order substances on room service, if you knew the right people to ask. Seriously. And we did! We partied. We lived the 80s...and then one more time around.”

'Everybody was doing it, and no one felt bad about it'

Le Bon attributes his sobriety to building a life with his wife, Yasmin, and their three children.

“Things changed when I got married. They had to.”

This isn't the first time the band have come clean about their notorious ways.

As one of the UK's biggest exports, Duran Duran's achieved just as much recognition in the 1980s for their partying.

Bassist John Taylor revealed in his 2012 memoir 'In the Pleasure Groove: Love, Death and Duran Duran' that drugs aided his doubts and insecurities about being in one of the biggest bands in the world.

“Hundreds of grams were being charged to record company accounts every week. Everybody was doing it, and no one felt bad about it. No one took it seriously. No one had been to rehab. Yet.”

"It got to the stage where cocaine was literally given to me on a plate every day when I was in the band. I didn’t even have to ask for it. I didn’t eat that much. I took drugs – that was my diet."

"I convinced myself it was cool.”

Meanwhile, the 'Wild Boys' hitmakers just revealed they are in talks for a biopic.

The film will chart the group's formation in the late 1970s and their success during the following decade. It will also document the reunion of the band's most successful line-up in 2001, and no doubt some of their antics will be included.

Drummer Roger Taylor revealed that the group wants rising stars to portray them in the film.

He said: "It's something that is under discussion. It is being discussed and we've had different scripts and ideas put forward.

"We haven't quite decided on the right one yet. But there are things in development so we will see where they go. We would love to do something like that and I think something will happen in the next few years."

He continued: "I would want a really good Hollywood actor to play me.

"It would have to be someone who's on the cusp of their career, who's got the right look, the right vibe and that's going to take some time to find I think."

Until then, the band are busy promoting their 15th studio album 'Future Past'.