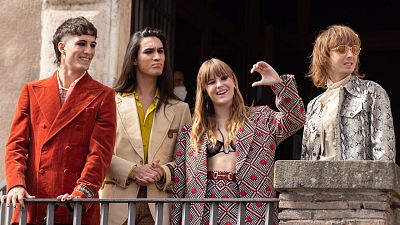 Italian Eurovision winners Måneskin will conclude their first US run of shows with a night in Vegas supporting the Rolling Stones.

The band will play Las Vegas' Allegiant Stadium - which holds 68,000 people - with the band on November 6.

It was announced during their US TV debut on the Tonight With Jimmy Fallon show, who included the surprise as part of his introduction of Europe's most exciting band.

Måneskin have experienced a rocketesque trajectory off the back of their Eurovision success unlike any winner in generations.

In the past six months the band has broken 1 billion streams with their cover of the Four Seasons' 'Beggin', sold out their first European tour in two hours, and featured in a Gucci fashion campaign helmed by Alessandro Michele.

Måneskin fever spreads to the US

Late-night television host and US national institution Jimmy Fallon had some kind words to introduce his new guests with, advising the audience to get ready to have their "pants blown off".

In addition to next month's performance with the Stones, the band, who originally hail from Rome, will take on Los Angeles on November 1 in a sold out show that was only announced last week.

Demand for the band is steadily matching their popularity in Europe - resale tickets to the small theatre show are selling for as much as $500 (€429).

The quartet formed in Rome, Italy, in 2016, and have gone from strength to strength since winning Eurovision earlier this year.

The guitar-wielding dynamos managed to take time out of their US TV debut with a performance at an NYC cultural institution - The Bowery Ballroom. Building on the venue's heritage, created by the likes of The Strokes, The Killers, and Lady Gaga, the four-piece gave an electric performance.

Once back in Europe, the four rockers will appear at the MTV European Music Awards, which take place in Budapest, Hungary, on November 14.

MTV has confirmed they will give a performance in light of nominations in three categories: Best Rock, Best Group and Best Italian Act.