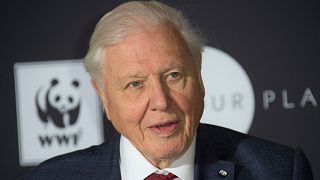 Sir David Attenborough poses for photographers upon arrival for a WWF announcement and State of the Planet Address in Westminster on Nov 8, 2018   -   Copyright  AP Photo
By Shannon McDonagh  •  Updated: 22/10/2021

Sir David Attenborough has won many awards and received countless accolades in his long and illustrious career as a broadcaster.

And now it appears he can add to his skillset.

New data released by TheFork – Europe's leading online restaurant booking and discovery platform – found that Attenborough is the most likely celebrity to tempt British diners to try a new restaurant. 45 per cent of British customers would be convinced to eat somewhere different by the legendary broadcaster.

The study revealed that intervention from The Queen wouldn't be enough for 55 per cent of Brits to change their dinner plans, while politicians Boris Johnson and Sir Keir Starmer were discovered to be the least persuasive.

The data discovered that a whopping 64 per cent of Brits admit to being creatures of habit when it comes to dining, with 15 per cent going to their default dish whenever they eat out.

The top 10 celebrities most likely to influence Brits to change their dinner plans are as follows:

TheFork - formerly known as Bookatable - is encouraging Brits to switch up their dining habits with the launch of the Fork Festival.

People can enjoy 50 per cent off hundreds of new restaurants across the UK until November 28th.