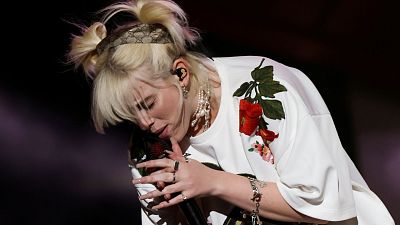 Billie Eilish has been confirmed as a the first headliner for Glastonbury 2022 - and will be the prolific festival's youngest ever performer to do so.

Fans grew suspicious of the singer - who turns 20 this year - after a teaser picture was posted to her Instagram Story of her sporting a Glastonbury festival hoodie, followed by the caption "2022."

The festival will return to Worthy Farm, Somerset, next year after a three-year COVID-19 induced absence.

Eilish's performance was confirmed by Glastonbury organisers, father and daughter duo Emily and Michael Eavis, via Twitter. They announced the "wondrous" artist will take to the Pyramid Stage on Friday, June 24, 2022.

A statement on the official Glastonbury Twitter page read: "We are very excited to confirm that @billieeilish will headline the Pyramid Stage on the Friday night at Glastonbury 2022, to become the Festival's youngest ever solo headliner. This will be her first UK festival headline performance."

We couldn’t be happier to announce that the wondrous @billieeilish is headlining the Pyramid on the Friday at next year's Glastonbury Festival, becoming the youngest solo headliner in our history. This feels like the perfect way for us to return and I cannot wait! pic.twitter.com/okFoERUPlF

A landmark for one of the 21st century's biggest stars

Eilish has experienced a monumental period of success since entering the public eye at the age of 15 when internet buzz surrounded her single Ocean Eyes, produced with her older brother Finneas O'Connell.

She has sat at the crux of 21st-century popular culture ever since, releasing two multi-platinum albums, an Apple TV documentary film, and receiving seven Grammy awards in the process.

The singer recently confessed she had "no idea" Glastonbury was "even a thing" until after she played the festival in 2019.

Her performance at The Other Stage fresh off the release of her debut album When We All Fall Asleep, Where Do We Go? drew one of the biggest crowds of the entire weekend.

"I feel so embarrassed because I had no idea Glastonbury was even a thing. I was like, 'What's that?"

"I didn't know it was a big deal until after I played it. Everyone was like 'oh my God, you played Glastonbury' and I was like 'Yeah, so?"

This, in her words, made the teen realise she was "a little uncultured baby".

Fans in attendance can be reassured it was by no means reflective of her experience performing there.

"It was such an honour. I mean, come on. Dude, the crowd was unbelievable. Those moshpits? Oh my God. The crowd was great."

Glastonbury was cancelled for a second year this summer due to the COVID-19 pandemic.

Taylor Swift, Sir Paul McCartney and Kendrick Lamar were due to headline the Pyramid Stage, while Diana Ross was announced for the Sunday afternoon legends' slot.

The festival is regarded as one of the biggest in the world in both size and status - over 200,000 devoted music lovers visit the 364-hectare site each year.

A statement released via the official Glastonbury Twitter page read: "With great regret, we must announce that this year's Glastonbury Festival will not take place and that this will be another enforced fallow year for us.

"In spite of our efforts to move heaven & earth, it has become clear that we simply will not be able to make the festival happen this year. We are so sorry to let you all down.

It is unlikely all four acts will make it to the festival next year for logistical reasons, but other artists tipped to join Eilish at the Pyramid Stage include Fleetwood Mac, Elton John, Kendrick Lamar, even ABBA.