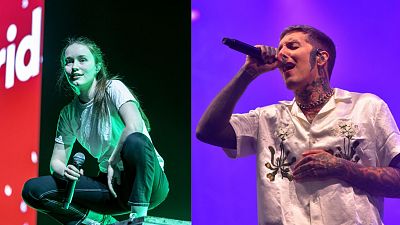 The 25-year-old Spellemannprisen winner is in the studio with the Sheffield metalheads   -   Copyright  Reuters
By Shannon McDonagh  •  Updated: 27/10/2021

Norweigan pop singer Sigrid has revealed she is in the studio with British rockers Bring Me The Horizon working on new music.

The singer's teased that 'Rock Sigrid' is due a spin in her second album, the follow-up to 2019's Sucker Punch.

So far, the work has spawned two singles - the bouncy, euphoric Mirror and the grittier Burning Bridges.

The unpredictable combo came together as a result of her love for rock music.

The 'Don't Kill My Vibe' hitmaker shared a snap with lead singer Oli Sykes and the band's keyboardist and producer Jordan Fish on Instagram, hailing them "legends".

The band were metal stalwarts for several years before complementing their style with Fish's programming and synthier instrumentation when he came on board in 2013.

In recent years they've worked with Halsey, Grimes, and Yonaka, but Sigrid is by far their most surprising creative partnership yet.

Over time, we've been blessed - and cursed - with some beautiful and bizarre match-ups in the music world.

Here are some of our the quirkiest collaborations to make the charts:

The uproar when Beyoncé appeared at the 2016 Country Music Awards was quite a sight to behold. Factions of America were perplexed by her appearance at their awards ceremony - on its 50th birthday, no less.

For those not blinded by genre, this is one of Bey's most joyous live performances to date. Not only did it symbolise her most creative era to date, but it thrust the Dixie Chicks (now known as The Chicks) back into the public eye after an almighty career halt 13 years prior, when they criticised the 2003 invasion of Iraq.

Some collaborations work well because they burst open the doors of a song's original idea. Those harmonies? That banjo? The horns? An unexpected, bombastic blend of talents that simply wouldn't have happened without some boundary-pushing.

Did it work? Absolutely.

The mid-eighties had been a rough time for glam rock's finest. Synthpop and New Wave had a firm grip on the eyes and ears of young music fans, and Aerosmith had failed to capture the attention of a new audience.

Until this stick of dynamite.

Run DMC entered 1986 with gold and platinum albums under their belt. And an extraordinary reworking of Walk This Way arguably put the white, long-haired part of the collab back on the map, giving them their first Billboard charting hit of the 80s after a seven-year drought.

Even better, the accompanying music video is self aware about just how absurd it is for the two groups to be working together.

The idea put Rick Rubin, hailed now as one of the best music producers in the world, at a level of undeniable respect as he went on to produce some of the most vital albums of modern music.

Adele's 21, Jay-Z's 99 Problems, and Linkin' Park's Minutes to Midnight potentially wouldn't have carried the same spark without this.

Did it work? Decades of karaoke history say yes.

There's not a lot that can be said about the Black Eyed Peas frontman's output post-2009.

Love it or despise it, his and Fergie's musical chemistry was responsible for a gigantic amount of chart-toppers that brought something a little bit different to the table every time. Pump It sampling Pulp Fiction's famous slide guitar is an excellent feat of creativity, and The E.N.D was nominated for six Grammy's with good reason.

Will.i.am soon became the world's certified collaboration king off the back of this innovative production style. T.H.E (short for The Hardest Ever) on the other hand, is a pastiche of every musical trend of the early 2010s, with a Rolling Stone thrown in for good measure. Jennifer Lopez is given very little to do given her inherent pop coolness.

It's remarkably difficult to get over Mick Jagger announcing that this beat is "hard like geometry, or trigonometry" as he floats throughout Will's technicolour space universe.

What was the reason, exactly? We'll never know.

Did it work? Not quite.

But how it began is forever enshrined in music history as a beautiful merging of two completely different, equally special, artists that are dedicated to their craft.

The pair first came together in 2014 to record a jazz record that seemed completely out of the blue. Fans of Gaga saw it as a total U-turn from the electrifying hit-and-miss material that came from ARTPOP just a year prior, but the singer was able to reap the rewards.

Without shining the spotlight on her soulfulness, her award-winning performance in the fourth incarnation of A Star Is Born might have been a little harder to come by.

Besides that, the two of them look like they're having a lot of fun. Four years later another joint album followed, and Gaga will go down in history as one of the last ever artists to perform with Tony on stage as he celebrated his 95th birthday this summer.

Did it work? Completely.

On the evening of September 22nd 2016, fans of Abel Tesfaye's brand of moody, seductive RnB were propelled into a state of shock. Their once faceless idol unveiled his latest era to the soundtrack of bouncy, industrial beats.

Tesfaye's keen eye for unique production embellishments has been a mainstay of his career. This time, he had the help of two equally elusive Frenchmen - Guy-Manuel de Homem-Christo and Thomas Bangalter, otherwise known as Daft Punk.

“Working with Daft Punk was like, ‘Whatever you guys want!’” the Weeknd recalled earlier this year.

“I just wanted to get into the studio with them — I didn’t even care if we made music, I just wanted to be friends. I met Guy-Man first, out partying in L.A., and I actually partied with him more than I worked with him. He’d would tell me, with loud music playing over drinks, how much he liked my work.”

The things they made together have evidently informed much of Tesfaye's future output. It was the first sign of something bigger from the artist critics had started accusing of being one-note, miserable. Tell that to last year's Superbowl headliner.

Did it work? A total reinvention. Yes.

What in theory should have been an absolute stonker of a 21st-century pop collaboration ended in misery when this trio featured on the soundtrack to Elizabeth Banks' Charlie's Angels reboot.

Miley, Lana, and Ariana have all sat at the throne of America pop music in swift rotation. In theory, their combined fanbases could have made it a smash.

But their mismatched, overly complicated attempt at a girl-power banger was no Destiny's Child. Budget was prioritised well over the oomph expected from such a union, and the result ultimately fell flat.

Did it work? We wish.