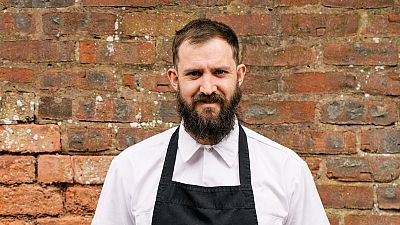 A favourite haunt of Friday night revellers, kebab shops aren’t usually known for their gourmet offerings — but one chef is looking to change that by giving the humble döner a Michelin makeover.

All served on Turkish pide bread, the kebabs are made from locally-sourced, high-quality meats such as Tamworth Mortadella, Cornish Lamb and Cotswold White Chicken.

“The kebabs are everything you love about a kebab, but all done with the best UK meats that I would use in my Michelin star restaurant,” Carter told Euronews Culture.

The idea was born out of the winter lockdown when the chef began creating takeaway kebabs while his restaurant was forced to close.

“I wanted to bring joy to people’s lives by doing something fun, so I borrowed my friend’s kebab spit and put a mortadella sausage on it,” he said. The idea proved extremely popular, selling 400 portions in two days.

“We ended up selling them every Friday and Saturday throughout lockdown as a click and collect. Instead of just mortadella, we added lamb and then changed the meat every week, buying big amounts to support local suppliers.”

After five months, Carter knew he had a successful business idea on his hands.

Quality kebabs for all

At £10 per kebab, the aim was always to prioritise accessibility, applying a Michelin star ethos and expertise to a comfort food that can be enjoyed in a relaxed setting.

“High-end restaurants can be quite exclusive and they shouldn’t be. They should be accessible to everyone, and the kebabs are an extension of that,” Carter said.

“One of my fondest food memories was queuing in Berlin for four hours, in -12 degree weather, for a Gemüse Kebab. It was one of the best things I’ve ever eaten - still to this day.”

He also remembers filling up on potato smiley faces before heavy weekends, a nostalgic classic that he now serves as a side with caviar in his restaurant.

Carters of Moseley and beyond

Completely self-taught, Carter first opened his Carters of Moseley restaurant in 2010 with partner Holly Jackson, going on to win numerous awards and accolades including a Michelin star in September 2015.

Since opening last week, One Star Döner Bar’s kebabs have also been a huge hit: "We sold 560-something last Saturday."

While Carter’s not ruling out the possibility of expansion, for now he's focused on the present.

“Manchester’s such an energetic, young city with so much going on. It’s the right place to be. [The franchise] is something that I’d like to see grow, but that will happen organically, it won’t be something that I’ll force.”

Chester Grosvenor's Michelin omission leaves the county with no stars

Slovenia: Gastronomy and innovation in a truly green and pleasant land