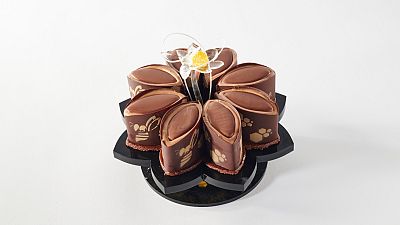 Italy are the new pâtisserie world champions having beaten a strong field at the 2021 edition of the Pastry World Cup (Coupe du Monde de la Pâtisserie). In second place were Japan and in third place were the hosts, France.

The team from Chile were given a special prize for team spirit, while the sustainability prize for zero waste went to Switzerland -- and the fans could not have provided more cowbell!

After 50 national and 4 continental selections, 11 countries spent a specially alloted amount of time creating their masterpiece desserts, culminating in the grand final on Saturday evening. Tension built to a crescendo inside the halls of Sirha Lyon as the results came in.

The other finalists, the UK, Egypt, South Korea, Russia, Algeria, and Mexico, had braved the obstacles to the finals in Lyon to attempt to triumph in the greatest event in their profession. The winning team took home 21,000 euros, the second-placed team 12,000 euros and third place received 6,000 euros.

Having watched the teams at work during the competition, there is, quite clearly, huge pressure and the need for an extraordinary amount of concentration. You are working with not only ingredients that have wildly different flavours, sizes, viscosity, depth, etc but also against the clock and with a mission defined by somebody else's rules.

"You go inside your own brain because you're focused on what you're doing, and it doesn't really matter what anybody else is doing because it doesn't affect you, ultimately," says Chris Seddon, a wiry, lucid pastry chef from team UK, who didn't place at the championships. He is not happy.

'It's probably worse than Eurovision'

"It's a commercial competition, and I think maybe some nations are not fully up to speed about what the rules and regulations are because there seems to be elements that have directly gone against the rules," Seddon disclosed to Euronews after the results had been announced. He has been here before, is no stranger to pastry competition, and visibly furious.

"It's a bit of a slap in the face because it was a similar position last time (against Italy) when they got bronze ahead of us and I know for a fact they hadn't put gelatine in their cake and everyone thought 'ah, it's a liquid insert' but in actual fact they had f**cked up the recipe. But because the Italians had done it -- oooh, it's innovation."

It's easy to be a great technician but if there's no story behind it, who are you?

Asked if he thinks there could be a Brexit bias, Seddon admits "there could be a bit of that. What with France being on their home territory as well, they've got a lot of sponsors behind them. If they hadn't got on the podium, they might have lost all their sponsorship."

But Seddon's fundamental complaint comes down to accusations of rule breaking. "This year you couldn't use any kind of freezing method, and Italy were using liquid nitrogen so I don't really understand how they didn't get marked down for that."

"It should have been dealt with there and then," says Seddon. "They make a lot of rules and don't seem to stick to them."

Dominique Crenn is one of the judges in this year's championship. A French chef and owner of Atelier Crenn in San Francisco, she is currently the only female chef in the US to attain three Michelin stars.

"When I saw the Italian dessert, it spoke to me," she tells Euronews. "I did something very similar in 2013, and it was storytelling. It was about connecting the human to nature, and nature communicating back. It's a very important story, it's a story about the ecosystem. You look at it, everybody connects with it. It's easy to be a great technician but if there's no story behind it, who are you?"

"I love the Italian dessert because it was amazing in terms of technique and detail. The taste was refreshing and they also had a very animated service. A lot of countries didn't take advantage of that part of the experience," says Lee. "We expected the animation and connection with the client."

Lee admits, however, that the UK team succeeded in this area. So what do they say to accusations of judges not applying the rules?

"Everybody is entitled to their own thoughts," chimes in Crenn. "You can say I'm French and I live in the United States but I come here and I leave my country of birth to the side. It's all about the experience."

The competition's latest incarnation has evolved to align with eco-responsibility, thus product sourcing and natural tastes are now the order of the day. There is a ban on additives which means colourings, glitter powders (E172) and titanium dioxide are out of the question.

Valrhona and CapFruit are the competition's partners.

Juliana Lepan, Valrhona's head of Marketing, told Euronews that their appearance at the World Cup is not merely for visibility. "We've been with the competition since its inception and we play a supporting role to the chefs who come to show the world their innovation."

Though a self-confessed small player in the global chocolate industry, the brand has worthy ambitions, which reflect the chages in this year's competition. "More and more customers are committed to a sustainable vision," says Lepan. "Even the end customer will ask for these standards, but this vision is global. Actions are powerful and my dream would be to get the attention of all the actors in the industry to concentrate on eradicating food waste and encouraging fair trade."

Roland Casella of CapFruit is also here for visibility. But he is, much like Valrhona, keyed into sustainability.

"We're showing to the guys who are competiting, who have been working for many years to reach that level, that we are there to support them, to exchange information with them about the quality of ingredients we can provide."

CapFruit may well have been in the quality product sourcing business well before the competition made that facet a stipulation, but Casella is delighted they are finally on the same page.

"This is nothing new for us," he maintains.