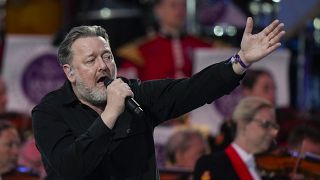 Guy Garvey spoke out against the venue closure which has been linked to gentrification in Manchester   -   Copyright  Alastair Grant
By Tim Gallagher  •  Updated: 02/11/2022

The lead singer of Elbow Guy Garvey has spoken out against the potential closure of an iconic music venue in central Manchester, UK.

Night and Day Cafe which sits in the city’s cultural and nightlife district, the Northern Quarter, was served with the Noise Abatement Notice (NAN) by Manchester City Council last year.

The notice came after neighbours complained of noise from the bar which regularly hosts live music events.

Night and Day has seen early-career performances from the Arctic Monkeys, The Courteeners, Kasabian, Manic Street Preachers, and Elbow themselves. The venue claims the NAN puts them at risk of closure.

"This a shameful disgrace and we are furious. Manchester's music and arts are things we all share and are rightfully proud of,” Garvey told ITV News.

"The council and its politicians, its football teams and its universities all use our music in proud promotion.

"Night & Day has taken hundreds of Manchester artists from bedrooms and garages to the world stage.”

Why is Night and Day Cafe under threat?

The story of Night and Day’s potential closure is a common tale across cities the world over; gentrification.

When the hotspot opened in 1991 Manchester city centre was far from the thriving district it is now. Night and Day was an early harbinger of Manchester nightlife and preceded the transformation the formerly dilapidated post-industrial landscape has undergone in the last decade.

"The vibrant scene started by Night & Day triggered enormous redevelopment in what we now call the Northern Quarter and making all this happen is a constant bill to bill balancing act,” says Garvey.

"That this cornerstone of our city's culture is under attack again is bewildering."

There was outcry amongst locals when the venue was served the NAN in response to complaints from a neighbour who had moved to the area during the pandemic.

“As soon as people understand there is a vibe in an area they move in and don’t think about the noise that comes along with it. There’s got to be a happy middle ground,” said Jase Jeffrey, a Manchester-based DJ.

The venue itself is challenging the noise abatement notice with a court date set for 29 November. The case will partially hang on whether or not proper noise insulation was placed in the neighbouring flats when they were renovated into residential properties.

Manchester City Council denies that the Noise Abatement Notice is intended to close Night and Day Cafe and have affirmed their support for the Manchester music scene.