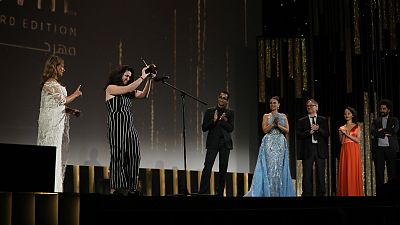 The third edition of the El Gouna Film Festival drew to a close on Friday (September 27).

Ome (2019) by Wassim Geagea was awarded the silver star, followed by Flesh (2019), which received the bronze trophy.

“In short films, you can really see new talents, raw talents, amazing ideas, new perspectives,” Hamed told Euronews ahead of the event. “Most of the time when you’re doing a short film you’re not scared — this is very important because you don’t have limitations.”

Give Up The Ghost wins Best Arab Short Film

A fourth award was handed to Jordanian filmmaker Zain Duraie for Give Up The Ghost (2019), the Best Arab Short Film at El Gouna.

The film had its world premiere at the Venice Film Festival earlier this year and will soon be showing at Interfilm Berlin and at the Arab Film Festival in San Francisco.

“I feel very lucky that I can show my film to people because that’s the dream of any filmmaker,” Duraie told Euronews. “It’s not the awards, it’s just being able to be at a festival like Venice or Gouna and showing your film to this amount of people and watching their reaction.”

Give Up The Ghost tells the story of a couple who are unable to have children. With a focus on the wife, Salam, the film addresses the external pressures of society, even when making personal decisions.

Salam has to find the inner strength to take matters into her own hands — a step which Duraie portrays vividly.

“I got sick of seeing women victimising themselves and feeling sorry for themselves,” she said. “The message I want to deliver is that a woman has the freedom to chose her way out […] she always has the chance to prove herself and shouldn’t be stuck in something toxic just because society taught her to be like that.”

Duraie was inspired to create the film by a similar real-life story told by her aunt. It left such a strong impression on her that she decided she had to take action.

“This was an opportunity to come back with a film and say something, I couldn’t just let go of it,” she said.

Another topic the film touches on is resistance to adoption, which Duraie also believes is an important matter to highlight, particularly in the Middle East.

“The majority of families are still obsessed with their DNA and adoption is still a very sensitive subject,” she added.

Directly or indirectly, many of the short films at this edition of GFF touch on the subject of parenthood and the relationship between parents and their children.

In Between: parents long for the return of their children in Kosovo

In Between (2019), a short documentary by Samir Harahoda, shows parents in Kosovo whose children live abroad. In the hope of their return, the parents build identical houses next to each other.

“They build them this way because they want to give the children all the same, equal parts,” explained film distributor Ben Vandendaele who came to El Gouna to represent In Between.

When construction of the buildings is completed, the houses remain uninhabited as the children only return to visit and attend certain occasions, such as weddings or funerals.

Vandendaele told Euronews that he decided to support the film from the very beginning. “I was immediately hooked on the idea because if you drive for example from Prishtina to Prizren you see those identical houses, so I was very intrigued.”

Although the story is set in a specific community, Vandendaele believes that what quickly captivates international audiences is the universal family values attached to the story.

“Everybody wants to keep their families close and not see everybody go away,” he said.

The film premiered in February at this year’s Berlinale as the first film from Kosovo ever to be screened at the festival. Since then, it has been included in the selection of 25 other festivals and Vandendaele is ambitious for more.

“The selections will continue because we’re only at nine months of screening, so that’s a very good average,” he said. “That’s the first goal, to have a good festival run for another year and in the meantime, I’m proposing it to TV stations.”

Jetski: a son who wants to give his dad a last goodbye

The film portrays the life of Mido, a young boy who takes care of his sick dad. As his dad’s health worsens, Mido finds out his father was once a jet ski champion and decides to do whatever he can to give his father a fitting "last goodbye".

Abd El Mawla, who both directed and wrote the film, said he has personally always been moved by films that explore the relationship between father and son. But, having Egyptian parents who migrated to Europe, he also wanted his film to touch broader societal topics.

“I didn’t want it to become really cheesy,” he told Euronews. “I tried to show some poetic background of migration, isolation and having responsibility when you’re young.”

Abd El Mawla added that having his film shown in the El Gouna Film Festival, is “an honour,” particularly because it’s his family’s home country.

“My parents are back in Amsterdam right now, texting me because they’re really proud,” he said. “It’s something I’m really happy with because at least [the film] does something for them, that’s the most important thing.”

This Is My Night: a mother and son’s challenging day out

While the El Gouna Film Festival features international works it also greatly supports Arab and national cinema, such as This Is My Night, a film directed by Yusuf Noaman and written by Ahmed Ehab Abd el Wart.

Done with the support of UNICEF, the film tells the story of an underprivileged woman who has a child with Down syndrome.

When the two go for a walk in one of Cairo’s high-class districts, the day doesn’t go as planned. Despite the turn of events, Azza keeps doing all she can to comfort her son.

“The movie reflects the relation of society towards poor people and people with Down syndrome,” explained Noaman. "Here in Egypt, people still don’t have the ‘good culture’ of relating to these people.”

Due to the lack of inclusion, the main characters face strong judgement throughout the film, and not having the support of others makes a simple outing very eventful.

“[The characters] have a lot of needs, and maybe they were simple needs but still they face a lot of troubles,” he said.

Noaman added that keeping the piece as true to reality as possible was one of his priorities.

The way the film is shot, entirely in Cairo’s streets without the use of any studio, helped to achieve this goal.

According to the director, it took almost two years to cast the character of the young boy Amr and a lot of research was done in order to carefully portray his relationship with his mother.

“I did a lot of meetings with mothers that have children with Down syndrome and with the actress, to find out how they really felt towards their sons,” he said. “It’s a very special relationship.”

El Gouna Film Festival: How to get a film seen around the world

Change in narrative: how can film play a part in refugee crises?