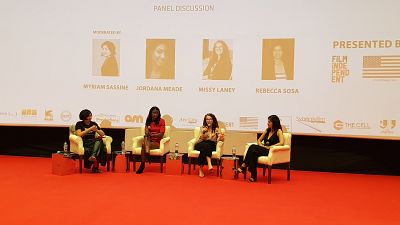 While a compelling storyline, surprise twists, and memorable characters are what many think are the key ingredients of a hit film, there are actually a lot more factors that take behind the scenes.

Getting people to actually see your film is one of the most difficult and constant challenges independent filmmakers face after creating their work.

Distribution specialists from the US gathered on Tuesday to discuss the topic of disseminating independent films at the third edition of the El Gouna Film Festival in Egypt.

Their aim was to educate young filmmakers from the Middle East and North Africa about the obstacles they face, but also the opportunities they have when trying to get their movie seen internationally.

“And she wears the pants,” she added, highlighting the shared view of the all-female panel — people need to know your film exists before it becomes a huge success.

There are a number of distribution companies in the Middle East and North Africa (MENA) region that help independent filmmakers share their films, such as MC Distribution in Lebanon, OSN and Front Row Filmed Entertainment based in the UAE, and Saudi Arabia’s Arab Radio and Television Network (ART).

These organisations work with filmmakers throughout the process of making a film to ensure their reach, but some say there aren't enough to deal with the volume of films coming out of Arab countries.

The MENA region faces its own challenges when sharing films, said Myriam Sassine, a producer at Abbout Productions in Beirut, Lebanon and moderator of the panel.

“The Arab world is divided, let's say, not in a bad sense ... but Lebanese movies are not something a Moroccan audience or an Egyptian audience will want to see,” she explained.

“So it’s not like one Arab film is going to be distributed everywhere in the Arab world,” Sassine added, identifying distribution and funding as key issues in the region.

That’s where the panel agreed digital distribution plays a part, describing it as the liberator of audiences today.

Movie fans don’t have to travel to a local film screening and they can bypass censorship if needed, while looking for independent films that fit their interests from the comfort of their own couch.

This is an aspect the panel said filmmakers can, and should, plan in the pre-production stage of making their film.

“One should not be thinking about distribution after the completion of their film,” said Jordana Meade, the director of North American distribution at ITVS, a California-based non-profit organization funded by the US Congress to create creative programming for public television.

“Distribution starts early, early, early on,” she said, even when independent movie makers are writing their scripts, in order to appeal to audiences and also distributors like her, who are looking for original content.

Meade said when she’s looking for films, she’s searching for diversity, such as lead characters who are women, people of color, non-cisgender, or generally content that stands out and pulls in niche audiences.

This is something that filmmaker Lydia Ghorbal does regularly with her company Momental, a brand content agency based in the UAE and Egypt, which works mostly with non-profit organizations to turn their ideas and messages into creative films.

“Here you have a better chance at visibility and better distribution since there is less competition,” said Ghorbal, the founder and creative director of Momental, who creates interactive films in the MENA region, allowing viewers to choose the path the film takes and select the outcome.

“Passion isn’t passive, it’s very active,” she said, like her interactive film work. For Ghorbal, coming to festivals and panels like the one in El Gouna is a way to network and meet distributors that are looking for films like hers to share globally.