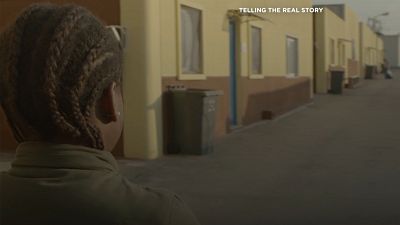 Humanitarian and Arab filmmakers gathered for the 3rd edition of El Gouna Film Festival in Egypt to discuss the cinema industry’s role in the world's refugee crises.

The panel was part of the CineGouna Bridge, the festival’s series of discussions that bring together Arab and international filmmakers to exchange opinions and experiences on different aspects of society, and how these themes relate to cinema.

In recent years, a number of films portraying the struggle of refugees and asylum seekers have been produced, many of which were critically acclaimed. The El Gouna’s panel of Refugee Voices In Film puts into perspective the importance of these films, debating why now is time for a change in their narratives.

Telling their story: Why is it important?

According to Shaden Khallaf, a panellist and UNHCR senior policy advisor, whilst the Middle East and North Africa only account for 5% of the global population, the region hosts 40% of the world’s refugees.

Khallaf highlights that it’s up to citizens — and not only organisations — to be more conscious and respond to refugee crises in everyday life. This is why an element as ubiquitous as cinema plays an essential part.

“I think refugee stories […] are about identity, about belonging, about home, about loss, about hope and these are all themes that connect us all as humans,” she tells Euronews. “[Films are] an incredibly important channel by which we can share this common humanity and increase tolerance and acceptance among people, all over the world.”

Daniela Cicchella, who also works for UNHCR, is another a member of the panel. She heads a project called Telling The Real Story, which focuses on facilitating dialogue within the refugee community.

"The shift was to talk not about them, but to them,” she explains.

“There is a lot of communication around but the trust of information is crucial so when the [refugee] community talks to itself through these enhanced forms of dialogue that’s probably the most effective communication,” she tells Euronews.

With some of the project’s testimonies being adapted to video format, Cicchella explains that close cooperation between filmmakers and displaced communities could have a long-term impact.

“Ideally, if there is an increase in interest from the filmmaking industry about the content of refugees, not only about the refugees but with the refugees to talk about their difficulties and also their resilience and opportunities maybe there is a possibility for change,” she says.

Throughout the discussion, members of the panel identified that involving more refugees in the process of filmmaking is key in order to provide more authentic narratives and avoid over-dramatisation.

According to Thuraya Ismail, humanitarian and social work expert, cinema audiences are tired of being “emotionally blackmailed” by upsetting stories involving refugees. Instead, she believes their narrative in film should also focus on showing the positive influence they have on their communities, be it socially or economically.

On the same line of thought, actress and producer Saba Mubarak vows that when films don’t treat refugee narrative with the right approach, the audience ends with an adverse feeling towards them.

“They shouldn’t be treated as a disease,” she adds.

Mubarak starred and co-produced The Guest: Aleppo-Istanbul (2017), where the large majority of cast and crew were refugees and the storyline is based on real facts.

During the pre-production phase of the film, Mubarak tried sleeping in the streets and spent 500 hours collecting stories from refugee camps in Turkey.

“No matter how much we try, we can never put ourselves in their shoes,” she says.

Film director Amr Salama also highlights the importance of authenticity in these films and how displaced people should be given the opportunity and encouragement to voice their experiences in film.

“We see all these films about refugees done by foreigners, of course many of them have good intentions, but they still feel like charity films,” he adds. “We need to empower people from this region to tell their own stories.”

As an example, he cites a succession of films made by Palestinian directors that have impressed cinema experts, such as Hany Abu-Assad, who directed Omar (2013) and Paradise Now (2005), and Talal Derki, director of Of Fathers and Sons (2017).

Why is now the right time for change?

According to filmmaker Amin Dora, now is a key moment for refugees to speak up and counter the negative stereotype that their status might carry.

Dora believes that with the start of the global refugee crisis, stories seen in the media mostly portrayed hardship. However, with time, he says many were able to integrate and contribute to their new community - and that’s when filmmakers have a new angle to explore.

“We should now start talking about their achievements, about how they dealt with their situation, going away and making successful stories,” he tells Euronews.

This idea is not only to give film audiences a fresh perspective but also to help give the refugee community the new start that they need.

“[We should] take those and make them the right example for the rest of the refugees so they can be inspired or they look up and they stop seeing themselves as a dramatic topic all the time.”