Here are the key developments:

Joe Biden is just the second Catholic president in the history of the United States.

After attending church in Wilmington, the president-elect visited the graves of family members in the church cemetery. 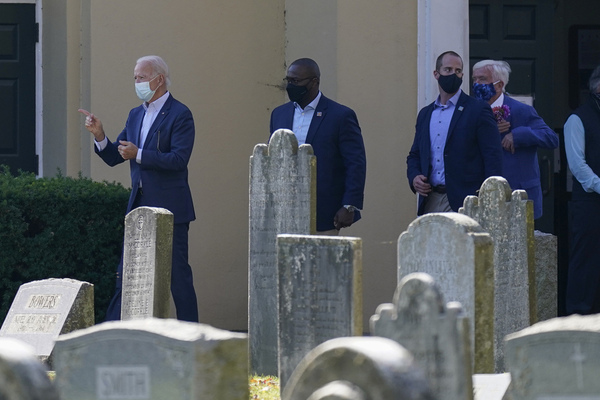 "The American people deserve fair elections. Every legal - not illegal - vote should be counted," Melania Trump tweeted on Saturday.President Trump has alleged that there were irregularities in the election despite having no evidence. They claim Republican observers were not allowed to watch vote counting even though there are always observers from both parties present.
18:40

George W Bush has become the highest-profile Republican to congratulate President-elect Joe Biden on winning the US presidential election.

Former President Bush said he spoke to both Joe Biden and Kamala Harris on the phone and offered his warm congratulations.

"Though we have political differences, I know Joe Biden to be a good man, who has won his opportunity to lead and unify our country," Bush said.

He said that President Trump had the right to request recounts and pursue legal challenges but that the "American people can have confidence that this election was fundamentally fair, its integrity will be upheld and its outcome is clear."
18:18

Some of Donald Trump's allies have stuck by him by refusing to accept the outcome of the US presidential election.

Republican chairwoman Ronna McDaniel tweeted: "The media doesn’t decide who wins elections, voters do. In multiple states the margins are razor thin with counting ongoing, several of which are headed for recounts."

"The media can project an election winner, but they don't get to decide if claims of broken election laws & irregularities are true," tweeted Republican Senator Marco Rubio.

Most Republicans have stayed silent on the outcome of the race, including Senate Majority Leader Mitch McConnell.

Trump has however broken with tradition by refusing to concede the election. There were recounts in several states following Trump's win in 2016 but that did not stop Hillary Clinton from conceding the election or Trump declaring victory.

Some Republicans have congratulated President-elect Joe Biden, with Senator Mitt Romney calling on the party to get behind the new president.

GOP Senator Roy Blunt told ABC that he thought it was too early to declare Biden the President-elect but said he thought a different outcome was "unlikely."
17:13 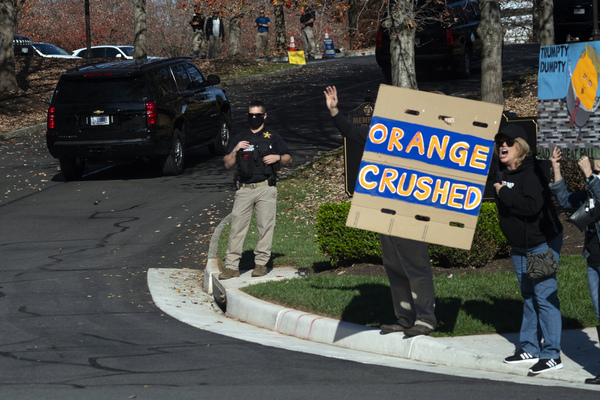 'Now more than ever we need to come together as Americans': Maryland Governor Larry Hogan says

Maryland Governor Larry Hogan was one of the first Republicans to congratulate Joe Biden on winning the presidential election.

"Everyone should want our president to succeed because we need our country to succeed. We have great challenges ahead of us as a country. Now more than ever, we need to come together as Americans," Governor Hogan tweeted.

Massachusetts Governor Charlie Baker, also a Republican, congratulated the President-elect, stating that if there are court battles, they should move quickly.

"If the courts do get involved, they must move quickly to make fact-based, lawful decisions, because the people of this nation - who came out and voted in record numbers - deserve a government that can work collaboratively to fight COVID-19, rebuild our economy and give people hope that there will be a positive path forward," Baker said.
16:09

Donald Trump has refused to concede the US presidential election, repeating his claim that the election was "stolen" while retweeting a quote from former US Speaker Newt Gingrich.

Republican Senator Mitt Romney said that Trump had "a relatively relaxed relationship with the truth".

Romney said he would "prefer to see the world watching a more graceful departure but that's just not in the nature of the man."

Most Republicans have remained silent on the election outcome.

In the US, there is a transition period between the election and the inauguration of a new president so the incoming administration can prepare a new government.

President-elect Joe Biden has launched a transition website with four main priorities that will be addressed "on Day one":
Ted Kaufman, Biden's former chief of staff in the Senate and a former US Senator from Delaware, was taped to head the transition team.

Others on the transition team include Jeff Zients, the former director of the White House National Economic Council, and Michelle Lujan Grisham, the New Mexico governor.
14:40

US election is 'moment of significance' for EU partnership, says von der Leyen

Many European leaders were quick to congratulate US President-elect Joe Biden and said they were ready to work on climate change, security and the COVID-19 pandemic.

In a video statement, European Commission President Ursula von der Leyen said the US and EU were "friends and allies" and said the election was a "moment of significance".

She called the US-EU partnership "unprecedented" and rooted in "common history and shared values of democracy, freedom, rule of law, the respect for human rights, social justice, and an open economy."

Von der Leyen said the EU was ready to "intensify cooperation with a new administration" to address global challenges.

The EU had a complicated relationship with Donald Trump, who supported the Brexit referendum and criticised NATO, calling it "obsolete".