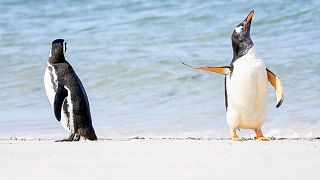 A slapping salmon, ‘farting’ zebra and one very oblivious heron were among the best of this year’s Comedy Wildlife Photography Awards.

But it was an incredible shot of a lion cub losing his grip on a tree that scooped the top prize, announced this morning (8 December).

The competition seeks out the most snaps from across the animal kingdom. This year’s panel of expert judges included comedians Russell Kane and Hugh Dennis, TV presenter Kate Humber and young conservationist Bella Lack.

‘Not so cat-like reflexes’ was taken by Jennifer Hadley from the US while travelling in the Serengeti in Tanzania. “This 3 month old cub and his sibling were in a tree,” she sets the scene.

“The other lionesses were in other trees and on the ground. He wanted to get down and walked all over the branches looking for the right spot and finally just went for it. It was probably his first time in a tree and his descent didn't go so well.”

But big cats tend to find their feet. Jennifer reports that “'he nimbly dropped to the ground, then scampered off with his siblings!”

Comedy Wildlife is donating 10 per cent of its net revenue to the Whitley Fund for Nature (WFN), a UK charity that helps conservation leaders working in their home countries across the Global South.

A few other category winners were chosen from more than 5,000 entries. Check out our favourite photos below from the 40 finalists announced in October.

This plucky duckling is somewhere special on the conga line from cute to funny.

They may have only made it across a few terrapin backs before falling off, but their courage at the Juanita wetlands in Washington is now immortalised forever. 'Excuse Me...Pardon Me!" was highly commended.

It’s not the most flattering of photos, but this snap of a seemingly explosively flatulent zebra is sure to delight young animal lovers.

The “zebra does a great impression of the 80's children's game Buck-a-roo,” comments the photographer Ryan Sims who spotted the “fart-powered” mammal kicking up dust in Amboseli, Kenya.

It’s hard not to smile or feel your hand lifting for a friendly wave back at this cheeky raccoon in Florida.

There’s a funny economy to the Czech photographer’s description, too. “I photographed a raccoon on a Florida beach, where I fed him shrimps. Then he thanked me like that,” says Miroslav Srb.

Salmon don’t have any hands to raise, but it’s not stopped this one giving a spirited slap back to the bear who wanted to make the fish its supper.

This dynamic shot is an absolutely extraordinary insight into the cut and thrust of the animal world in Alaska.

With enviable timing, Jean-Jacques Alcalay captured the moment a hippo appeared to be angling to swallow a heron whole.

But the bird - blithely perched on another animal’s back - was actually behind the hippo, who was just having a big yawn. Incredible framing, for which the French photographer won the competition's Air Category.

“These elephant seal weaners were practising their jousting skills for many minutes before they collapsed in exhaustion,” says photographer Andrew Peacock who watched them in the South Shetland Islands of Antarctica.

“One looks to be resting far more comfortably than the other!”

This tableau is an obviously funny collision of human and bird worlds, but it's also the scene of a crime. A picnic theft, to be specific.

“When this southern cassowary sat confidently down on a picnic blanket, it scared all of the picnickers away and started eating up the fish and chips that were laid out before it,” explains the photographer Lincoln Macgregor at Etty Bay, Australia.

Dubbed ‘the most dangerous bird in the world,’ cassowaries are the scourge of unsuspecting tourists, roaming the beachfront with their dagger-like claws most afternoons.

What can you do when such a fearsome predator locks eyes? The insincere expression takes the edge off this lion’s pose a bit, and - from a safe distance - it's hard not to smile back.

“One of the lionesses made some funny facial expressions after yawning, luckily for me she looked straight into the camera for a moment and I caught this fake smile.”

This big-eyed double act is a hoot.

“One morning, a few days before the two [eastern screech] owlets fledged, one owlet tried to squeeze into the nest hole with Mom, maybe to see the outside world for the first time,” recalls photographer Mark Schocken in Florida.

“It was hilarious and I was glad I was there that morning to photograph it. The moment lasted only a few seconds as Mom didn't seem very happy with the arrangement. Check out the expression on her face.”