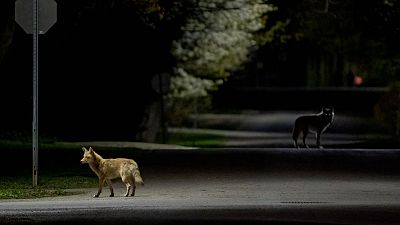 Seeing an animal on an empty street in the dead of night can feel both eerie and life affirming.

During the pandemic especially, city dwellers were shocked to see emboldened animals stray into the deserted streets of locked down urban spaces.

Deer in Paris, goats on the streets of Llandudno in Wales and even a puma stalking the streets of Santiago, Chile all captured the imagination of the public who were trapped at home with nothing to do but scroll social media.

Well, the art of urban wildlife photography is now the subject of a new competition hosted by Picfair.

The ‘Nightlife’ category saw a rat emerging from a city sewer in Mexico take the top prize, while a Flamingo in Italy won in ‘Daylight’.

In a public vote that took place on social media, an image of a Racoon in a ravine near a subway station in the ‘Fancy Seeing You Here’ category.

Meanwhile, the overall winning entry, by an amateur photographer who works in digital marketing, showed a pair of coyotes on a street in Ontario.

“I thought it was my car that had caught their attention as I rounded the corner, and maybe it had at first, but as I rolled down the window I heard it was another group of howling coyotes that had piqued their interest,” says winner, Andrew Interisano.

“I parked, turned the engine off, and frantically went to work with the camera… however, in the rush of that moment I was soon compelled to put my camera down and soak in the scene.”

‘Nightlife’ winner: Life Beyond the Sewer by Austin Montero

”The pandemic forced me to stay in a small town for the last two years. This led me to find several animals using different parts of our city. They shelter under bridges, move through aqueducts, or nest along roads. But usually, we don't notice it,” says the photographer.

‘Daylight’ winner: Window to the Salt Pan by Mano Aliczki

“This national park in Sardinia is home of one of the largest flamingo colonies on the island and allows photography of flamingos with the city and the now abandoned salt evaporating facilities as backdrop, creating exciting compositional opportunities. I managed to catch the moment when a feeding flamingo walked into a wooden frame in a levee on a salt pan,” says Aliczki.

“I’ve dreamed of photographing wildlife since I was a kid and only started seriously shooting at the age of almost 50, during covid lockdown when I decided it was time to make my own Natgeo dreams come true, even if it was only squirrels in the backyard,” Finney explains.

Runner up: Illuminated by Oliver Schultz

“I was walking back from Victoria Station on a cold English evening, and the twilight hour was fading. There was a chilly breeze cutting through the air, and while looking around, I saw a lonesome pigeon huddled against a warm light, just waiting for the night to pass,” says Schultz

“I went out to take this photo as Foxes, although common for most parts of my country, are rarely seen here. Especially for me, silent ghost hunters in the night! I wanted to capture the grunginess of the street as well as the elusive personality of my local foxes. I’m a disabled photographer with one arm, so my aim through my photography is to A) create amazing photos of our worlds most magical creatures and B) to show the world that being disabled, doesn’t mean I’m not able!"

Runner up: Kick by Cheryl Rogers

View the full finalists and winners’ gallery on Picfair here. All Picfair profits on print sales will go to global conservation non-profit Re:Wil.