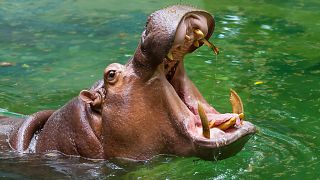 Despite their round and jolly-looking image, anyone well versed in nature documentaries will know that hippopotamuses are actually incredibly dangerous.

With their huge size and cavernous jaws, they can mess with pretty much anything in the animal kingdom.

But those impressive jaws aren’t just for chomping. New research finds that hippos actually have the ability to communicate complex social signals over long distances with their evocative “wheeze honk”.

The study, published in the journal Current Biology focused on this distinctive sound made by hippos that can be heard a kilometre away.

By playing back the sounds of hippos from different groups, the scientists realised that they responded differently depending on if they knew the 'honker'.

Famously territorial animals, if the hippos heard the call of an individual from their own group they remained pretty chilled out. But if the honk was from an unfamiliar hippo, the scientists saw them react with sudden aggression.

“We were able to playback signals and ask questions to animals,” Nicolas Mathevon, professor of animal behaviour at University of Lyon Saint-Etienne, France says.

The basic question the study asked was whether these animals could recognise the voice of a familiar hippo against that of a stranger.

“They have a vocal repertoire with different calls,” he explains. “When we emitted the calls from an unfamiliar individual, a few seconds later we’d get a call in response and at least one or two individuals approached the loudspeaker and displayed marking behaviour - spraying dung over the place.

Understanding how endangered animals like hippos behave can be key to ensuring their continued survival as humans encroach on their habitats.

“There are more and more animal-human conflicts and hippos are quite dangerous,” he notes. “We need to better understand the behaviour of the animals more if we want to manage the human-animal relationships.”

It’s not just hippos getting together for a bit of chinwag. The same research group has studied elephant seals in California and found that the males recognised each other’s voices.

There has also been a study of spotted hyenas from the University of California at Berkeley. It found that their iconic laugh gives other hyenas an understanding of the social rank of the speaker.

Different pitches of laughter could communicate age and differences in note frequency indicated their standing in the social order.

Dolphins also have the ability to tell each other apart based on their unique whistles. These marine mammal’s individual whistles are a signature that acts much like a name.

This discovery was important as not only did it give scientists more information on dolphin behaviour, but it also helps with tracking the animals for conservation.