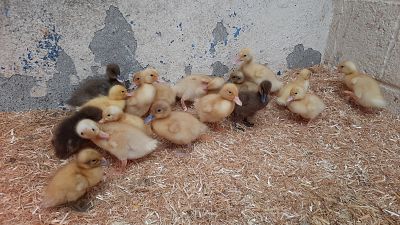 Hundreds of ducklings have been abandoned in Ireland after a TikTok trend led to children and teenagers buying the birds from street sellers for as little as €5.

Once the level of work required to look after the animals became clear, many of the ducklings were abandoned and rescued by animal welfare charities.

The Dublin Society for Prevention of Cruelty to Animals (DSPCA) started to receive calls from people whose children had come home having bought single ducklings on the street. In one week the charity took in over 90 ducklings and there have been similar reports in other parts of the country.

What caused this recent spike?

“It seems to have come about through social media, there has been a lot of stuff on TikTok,” says Gillian Bird, Head of Education at the DSCPA. “Obviously with cute little ducklings, people love to make short little TikTok videos on ‘duckling’s first bath’ and ‘duckling’s first feeding’ and all of that.”

On the social media app there are over 285 million videos under the hashtag ducklings and a number of these are people documenting their experiences of buying and raising ducklings.

Many of these videos garner hundreds of thousands of likes. Recently there have been videos on TikTok of young people with boxes of ducklings on public transport heading into Dublin city centre with the apparent aim of selling them.

Gillian Bird believes that people are trying to take advantage of the bird’s surge in popularity.

“They’re not making big money. You’re kind of visualising them literally opening their raincoat with a pocket stuffed with ducklings.”

“You’re kind of visualising them literally opening their raincoat with a pocket stuffed with ducklings."

Children & teens are buying ducklings for as little as €5 from street sellers in Ireland - who in some cases are scooping ducks up from rivers and ponds ?

The reality of ducks as pets

While it may seem like harmless fun for the young people buying them, there are serious welfare issues for the animals. Duckling’s feathers are not fully waterproof until they are four weeks old, so if you take a newly hatched duckling and put it in the bath it will sink.

If a newborn becomes cold it risks catching pneumonia which would kill it, unless you put it under a heat lamp. A pet duck is also a long term commitment as they can live for around 15 years.

The DSPCA are concerned that people will realise the amount of work involved in caring for a duckling and bring them to the local park and just release them, but if that happens the duckling will almost certainly die as it is unable to fend for itself and is at threat from predators.

Duckling’s feathers are not fully waterproof until they are four weeks old, so if you take a newly hatched duckling and put it in the bath it will sink.

Thankfully, the rescued ducklings are doing well. The DSPCA says that looking after many ducklings is not much harder than looking after one. When there are many, they move as a flock and help keep each other warm.

The problem now is finding them new homes. Some of the ducklings being sold were scooped up along rivers or ponds. For these wild ducklings they have to be rehabilitated which can take months before they can be released back into the wild.

The phenomenon of using animals for likes on social media is not a new one.

Just last month around Easter there were similar problems with people buying ducks and other animals as props for photoshoots and Easter baskets in America. The animal rights organisation PETA “urges families to remember that ducks, rabbits, and chickens are thinking, feeling individuals who need lifelong care, and they should never be bought as props.”