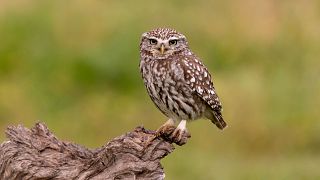 How do you encourage an owl to move house? By spraying fake poo around of course.

A team of Californian scientists has been helping one tiny owl species to find a new home, after its habitat has shrunk due to new building developments in US regions like Silicon Valley.

Local biologists have been trying to release the Western Burrowing Owls in protected grasslands for a number of years, but getting the minute raptors to accept their new homes has proven difficult.

The tiny, charismatic night-birds measure only 19-28cm in length - about the size of a robin - but have distinctly longer legs than their larger cousins. The subspecies is quite sociable too, preferring to live in burrows close to others of its kind.

Despite their sociable natures, burrowing owl numbers have been declining in California, falling by a third since 1965, due to the encroachment of the built environment.

In the wild, burrowing owls live for nine years on average, though they have many natural predators, including coyotes and snakes. Because of their small size and the fact they live in burrows, they are vulnerable to attacks by domestic cats and dogs.

Despite their name, the owls actually make their homes in the holes of other species, including prairie dogs and ground squirrels.

While they hunt at night like most owls, they are also active during the day, with their long legs helping them to run back to their burrows if a predator approaches.

How do you help an owl move home?

To help owl numbers recover, biologists from the San Diego Zoo Wildlife Alliance, working in partnership with the US Fish and Wildlife Service, came up with a plan to make the owls feel more at home.

Previous attempts had revealed that just releasing the owls into a new grassland habitat didn’t get the desired results so, for this pilot project, the biologists tried to make it look like owls already lived here.

“They like to be in a neighbourhood, to live near other owls,” Colleen Wisinski, a conservation biologist from San Diego Wildlife Alliance, told AP.

Scientists, including Wisinski, got creative spraying the field with what looked like owl poo, but was in fact white paint.

Scientists, including Wisinski, got creative spraying the field with what looked like owl poo, but was in fact white paint.

They also played recordings of owl calls for the mini birds of prey, so they’d think the meadow was already inhabited.

And according to the findings, published this week in the journal Animal Conservation, their hard work paid off.

Just under half were fitted with GPS trackers so scientists could keep an eye on their movements, and the biologists also visited them.

Most of the pocket-sized owls settled into their new grassland well.

And as a true marker of the study’s success, by 2020 about 50 owlets (baby owls) were born at the primary site of Rancho Jamul Ecological Reserve in southwestern San Diego County.