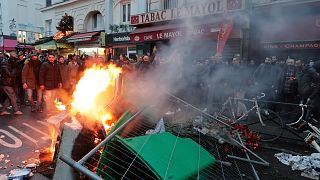 Clashes between protestors and police broke out in Paris on Friday following a mass shooting.

Clashes between protestors and police broke out in Paris on Friday following a mass shooting.

A gunman opened fire in the 10th arrondissement in Paris, near the Kurdish cultural centre and a hair salon, killing three and injuring three.

It comes 10 years after three Kurds were murdered just streets away.

A 69-year-old Frenchman was apprehended by police and an investigation is underway to find out the motives behind the attack.

Members of the Kurdish community gathered at the scene of the attack to showcase their grief and anger, saying they were being attacked again.