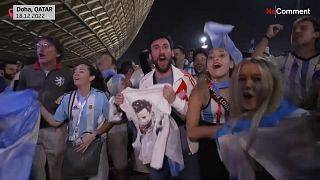 The late great Diego Maradona was the hero in Mexico City in June 1986, and the following June the star of the 2022 tournament was born. At 35, Lionel Messi crowned his glittering career, scoring twice in a thrilling contest against France that was finally settled 4-2 on penalties.

Kylian Mbappe's hat-trick, the first in a World Cup final since Geoff Hurst’s for England in 1966, ensured the game ended level at 3-3 following extra time.

But the astonishing Mbappe breathed life into the holders as he pulled one back from the spot with 10 minutes left before equalising in stunning fashion just 60 seconds later to force extra time.

Messi then seemed to have decided the contest in Argentina's favour once and for all when he scored again in the 109th minute, only for Mbappe to net another spot-kick, making it 3-3 and forcing a shoot-out.

It is the second time in five World Cups that France have lost the final on penalties after their defeat to Italy in 2006, and it is Argentina who are champions for the first time since 1986.

The win allows Messi, at 35, to complete his glorious career by emulating the great Diego Maradona.

"Obviously I wanted to finish my career with this. I can't ask for any more," he told Argentine television.

"My career is coming to end because these are my final years. What more could there be after this?"

But he said he would continue with the Argentina squad.

"I want to keep experiencing a few more matches as world champion," he added.

This will be remembered as his tournament despite the best efforts of Mbappe, who finished as the top scorer on eight goals, one more than Messi.

"I don't want to take any merit away from Argentina but there are lots and lots of emotions and it was cruel at the end because we were so close," said France coach Didier Deschamps.