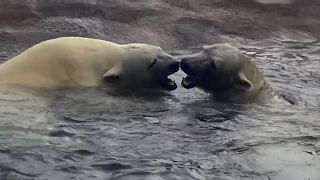 A pair of polar bears are now enjoying a purpose-built habitat at the Oregon Zoo in Portand where they can now be seen playfully sparring, chasing one another and splashing into a saltwater pool.A five-year-old polar bear named Amelia Gray and her half sister, named Nora, met for the first time this week in the habitat. The compound, known as Polar Passage, features two large connecting habitats, each with a large saltwater pool, shelters and natural terrain. The new area was designed to provide bears with their own space as well as opportunities to socialize.

Many of the habitat's features were funded through donations to the Oregon Zoo Foundation, which supports zoo's animal welfare, conservation and education efforts, according to a statement from the Oregon Zoo.

A zoo official says visitors will likely see more playful wrestling, swimming and diving from the two bears in the coming weeks.

The zoo is working with Polar Bears International, the U.S. Geological Survey and other partners on projects that will shed new light on how climate change is affecting polar bears in the Arctic.