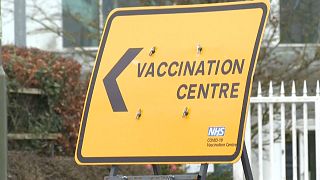 But fewer than 1% of people in low-income countries have so far received at least one dose of a COVID-19 vaccine, according to the University of Oxford's Our World in Data.

"I think we need to look more globally than just within our nations and consider how the vaccine rollout is going around the world," Dr Simon Kolstoe, a senior lecturer in evidence-based healthcare at the University of Portsmouth, told Euronews.

While G7 leaders pledged to share one billion vaccine doses, the World Health Organization (WHO) director-general emphasised that more vaccines were needed:

"This is a big help, but we need more, and we need them faster. More than 10 thousand people are dying every day," said Dr Tedros Adhanom Ghebreyesus.

"There are enough doses of vaccines globally to drive down transmission and save many lives, if they are used in the right places, for the right people. Health workers and those most at risk must be given priority over those at low risk," the head of WHO added.

Kolstoe explained that once international travel starts, it won't matter if people are vaccinated since people will come "in and out with new variants".

"I think the really key priority for all of us is to try and see how vaccination rates around the world more generally rather than in just individual countries."

But, Kolstoe maintains, vaccines are the key that will help countries to exit the pandemic that has so far killed over 3.8 million people globally.

"I think the variants that we've seen so far, yes, they've been more infectious, but they haven't necessarily been more serious. The worst-case scenario, obviously, would be a more serious COVID-19 variant or something that can get around the vaccines," Kolstoe told Euronews.

Boris Johnson announced on Monday that England would delay lifting all restrictions for another four weeks due to a rise in cases of the Delta variant that was first identified in India.

It is now the dominant strain of COVID-19 in Britain and a new study by Public Health Scotland found that variant nearly doubled the risk for hospitalisation.

Abortion rights defenders gather outside US Supreme Court and in New York.