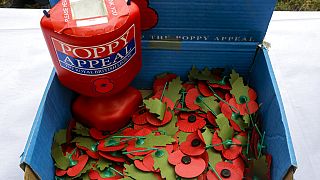 100 years ago a small group of ex-servicemen laid a wreath at the newly-dedicated Cenotaph in London's Whitehall.

The men represented four armed forces organisations set up nationally to care for those who had suffered as a result of service in World War 1, which had ended three years earlier with the 1918 Armistice.

The occasion marked the formation of the British Legion, the UK’s largest armed services charity, led by Field Marshal Haig, who had been the British commander at the battles of the Somme and Passchendaele.

Within months of its formation, the Legion launched the first Poppy Appeal.

"Since that moment in May 1921, the Legion has been working tirelessly for the rights of the armed forces community in Britain," Royal British Legion spokesman Alex Owen said.

"All the way through to the modern-day, whether that be helping people who have suffered life-changing injuries whether it be helping with finances, employment, housing."

"Everything from feeding people getting them off the streets all the way through to helping today, with championing remembrance and making sure that the sacrifices that were made for our freedoms and way of life are never forgotten," he added.

On its golden anniversary in 1971, The Queen awarded the Legion a “royal” prefix to its title.

On Saturday, May 15 the moment at the cenotaph will be re-created to mark the centenary of the Royal British Legion.

Representatives from the Navy, Army, RAF, and Merchant Navy along with a military widow will lay wreaths to mark the occasion.

"The Legion is still hugely relevant today, we still have an armed forces community in Britain that is 6.3 million strong and they do need our help every now and again," Owens said.

"We do absolutely crucial work with people who have suffered injuries from recent conflicts in Iraq and Afghanistan, all the way through to veterans of the second world war who we are providing care and independent living for so they can live dignified lives as well."

"We will continue campaigning for the rights and the needs of the armed forces community for the next 100 years as well," he added.

RBL Branches from around the world will also join in by laying wreaths at their local war memorials.