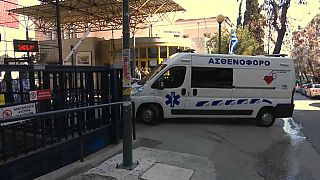 Greece is forcibly bringing in private doctors to help tackle the coronavirus pandemic outbreak. This measure will include 206 doctors under the age of sixty, who will be requisitioned for at least a month in order to take some of the workload off their colleagues in Greece's most populous region.

Konstantinos Syrigos, Director of Sotiria Hospital, says every day is worse than the one before. "We predict that the coming days will be a lot worse, meaning we've got a long way to go. This morning in Sotiria, we had zero ICU beds available and bear in mind that we're talking about the hospital with the most ICU beds in Greece"

It's certainly a difficult equation: Public hospitals' capability on one hand and on the other, people's exhaustion due to the restrictive measures, which have been on and off for a year.

Trying to solve the riddle, the Greek government decided to reopen hairdressers, nail salons, parks and open-air archaeological sites. But this has entered Greece into a paradox.

When the country entered a second lockdown on November 7, hospitals had to cope with far fewer patients compared to last Sunday, when the number of them on ventilators hit a record high.

In order to have a clearer picture of the situation, the government announced that each citizen will be able to get tested once a week at home or at a pharmacy.

Konstantinos Lourantos, President of the Athens Pharmacists Association, expressed his frustration at what he says was a rushed announcement. "Let's say a test comes out positive in my store. What then? The person would have taken off their mask, came close to me and I would have had to sit in front of them. This place is now infected, since he's COVID-positive. What should I do with the testing device? Where do I discard it? They just announced something, without knowing how it's supposed to work".

Greece is at a crucial turning point just weeks before the scheduled start of the tourist season. An ongoing vaccination campaign and further opening of activities keep the country hopeful that it has started on the path back to normalcy.