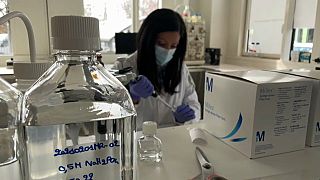 In the face of the growing prominence of coronavirus variants, such as the ones found in the UK, Brazil and South Africa, a universal vaccine efficient against all strains is the goal.

Around 20 teams across the world are at the early stages of developing vaccines that offer broader protection against a range of coronaviruses, from COVID-19 to Sars.

Before the pandemic, researchers were trying to find a universal vaccine against the flu. Their pre-clinical trials turned out to be promising.

They are now applying the method to tackle COVID-19. The difference with the vaccines is the part of the virus they target. The current jabs seek to trigger an antibody response by targeting the spike protein, which is on the surface of the virus. The universal vaccine under development at a biotech company in France, targets the nucleocapsid protein - which is inside the virus and less prone to mutations.

Delphine Guyon-Gellin is the manager of the 'universal vaccine' project at Osivax based in Lyon. She says, "We are targeting a part inside the virus, which is not accessible for the antibodies, so we train the immune system to develop another type of response: a cellular immunity"

The company hopes to start clinical trials for the COVID-19 universal vaccines in a year. For now, trials are on animals. In France, the Public Investment Bank has just granted Osivax 15 million euros in financing and a similar amount has been allocated by the European Commission.

There are many other laboratories looking for a so-called universal vaccine. In the United States, Belgium and Canada, a total of ten labs or universities have begun the research. In Belgium, a start-up is targeting pieces of protein essential to the virus that would protect against several of its forms.

In the US, a lab co-founded by a Frenchman says it is focusing on an antigen that avoids the variable parts of the Spike protein and incorporates the most important mutations. But can this potential new vaccine anticipate all the future evolutions of the virus?

Pascal Brandys, CEO of Phylex Biosciences says nobody can make long-term predictions. "There is a possibility of seeing the apparition of an all-new form of the virus. But regarding the actual strain, by incorporating the most important mutations, I think it's possible to develop a universal vaccine that could be efficient for at least some years"

In an open letter published in the science journal Nature, two leading researchers warn of the emergence of new and more deadly strains, partly due to the "relentless human encroachment on the natural environment".

This is the other race that has been launched across the world: the race for a universal vaccine. The problem is that there are still uncertainties regarding their potential efficiency and time will be needed to develop them - a process that could take years.