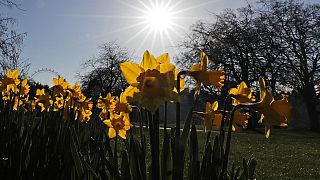 Millions of English daffodils left unpicked due to post-Brexit rules

The end of free movement of people from the European Union following Brexit, combined with COVID-19 restrictions, have made this season the toughest ever to recruit people to pick daffodils to meet the surge in demand for Mother’s Day this Sunday in the UK.

The UK is the main grower of this particular flower which is picked by hand rather than harvested by machines. A dwindling workforce means millions of bunches of dazzling daffodils will be left to wilt and rot.

"The biggest issue is staff, not being able to come over and do this sort of work. We would have had 100-150 people today picking –– and it is down to, what, 25 now, because they’re just not coming over," says Kevin Haynes, a farm manager from northern England.

That's because, since new rules kicked in at the start of the year, Europeans are banned from working on farms like this one –– because ornamental pot plants are classed in a different category to fruit and vegetables.

It is a quirk that is already having a massive impact on British flower farmers. Only food growers can use the government’s Seasonal Workers Pilot scheme. Most pickers have been unable to return to the UK since Brexit.

Adam Taylor, a Daffodil farmer who runs O.A.Taylor & Sons in Holbeach, Lincolnshire, says seasonal migrants have no reason to go to the UK.

"The British people voted for Brexit and yet all of this finer detail was not really clearly laid out for people to understand. And on Christmas Eve we were told that we had this fantastic deal, and everything was going to be great –– but it’s not," he told Euronews. "And yet the political statements come out that everything’s so easy – everything’s so possible. But it really isn’t."

The government says it is continuing to monitor the needs of ornamental flower growers, to ensure they are met. And that it will work with the industry to promote local recruitment. But for Daffodil farmers, in 2021, whole fields are being left to wither in the wind.

Watch Euronews' full report in the video player above.