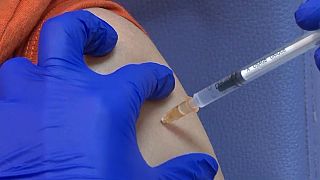 France, Italy, Austria, Hungary and the Czech Republic received their first shipments of the Oxford-AstraZeneca vaccine this weekend as the EU tries to ramp up its rollout.

Several European countries have already announced that they will not be supplying the vaccine to those over 65, because of the limited amount of trial data for that age group.

Now there are concerns that the vaccine may have reduced effectiveness on coronovirus variants.

More than 12 million people in the UK have now received a first dose of a coronavirus vaccine. The Pfizer-BioNtech and Oxford-Astrazeneca vaccines are currently being administered across the country.

While there are concerns regarding the effectiveness of vaccines against the South Africa variant, minister Nadhim Zahawi said the jabs being used appeared to work well against dominant variant that was first located in the UK.

Despite the UK's relative progress in its rollout, a report from British health authorities suggests that the majority of people from minority communities have not yet been vaccinated.

In some cases, religious and cultural beliefs are thought to encourage vaccine scepticism.

Dr Michael Dawes, Junior Doctor at Royal Shrewsbury Hospital says: ''It really shocked me when nurses would actually go and tell people, don't take the vaccine. But what really got me the most is when I heard one of the nurses I spoke to said "no, my pastor said no." That shocked me, it got me angry, and I said to her "give me your pastor's number and let me speak to your pastor.''

Hungary - thumbs up for Russian jab

Hungary has received its first batch of the Astrazeneca jab. The country's health authority has also approved Russia’s Sputnik V vaccine for use with 40,000 doses ready to be administered. The doses are the first batch of a total order of two million to be supplied over three months.

The Sputnik V vaccine has not been approved by the European Medicine's Agency, but several European leaders have indicated that it could be used to help sure up supplies after delays in vaccine deliveries to the bloc.

During a visit to Moscow, EU foreign affairs chief Josep Borrell said the Sputnik V vaccine is "good news for the whole mankind."

South Africa is suspending use of the AstraZeneca in its vaccination programme after data showed it gave minimal protection against mild to moderate infection caused by the country’s new strain.

A new study, involving 2,000 people indicates the vaccine does not work against mild and moderate illness. However, Professor Sarah Gilbert, Oxford's lead vaccine developer, said the jab should still protect against severe disease.

The variant is not yet prevalent across Europe.

And finally, Venetian masks in February are normally festive, but this year it's all protective, and the three million tourists that flock to the northern Italian city every year are absent. But optimism remains in some quarters.

"We are here today to say that Venice can live and be reborn, as it has several times in its history. We are sure and optimistic that it will come back," says costume salesman Armando Bala.

City authorities are trying to keep the spirit of the carnival alive by streaming a programme of events online, allowing people to party at home.