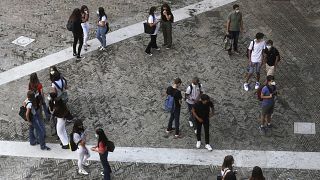 Psychiatric hospitals for young people in Belgium are seeing an increase in suicide attempts and depression amid COVID-19 restrictions.

The increase is so large that there are now a lack of beds, staff, and resources to care for them.

"I tried to make several suicide attempts, but I stayed thanks to my 5-year-old little sister. It’s because of her that I’m here now," says a Belgian teenager who is struggling with the lockdown measures.

Another person suffering is a young man who prefers not to be identified:

"I play rugby, it's a way for me to escape, to be able to express myself with my friends. Not being able to do that made it stay inside of me, and it created a little bundle of nerves."

But it's not just in Belgium that there's an increase of mental illness.

WHO Europe's Mental Health Coalition aims to increase support and guidance to every country.

"Mental illness is taking its toll, both on those who were already at risk, as well as on those who have never sought mental health support before," said Dr Hans Kluge, WHO's Regional Director for Europe.

"The International Labour Organization has found that the pandemic has meant that half of the young people aged 18 to 29 are subject to depression and anxiety - and up to 20% of health care workers are suffering from anxiety and depression."

And according to The French Student Life Observatory, one in three pupils has signs of psychological distress.

Just this week in France, university students and school teachers protested to defend living and studying conditions. They're demanding more support from the government during the health crisis.

If you're struggling with the issues brought up in the article, you can find a list of helplines in Europe here.