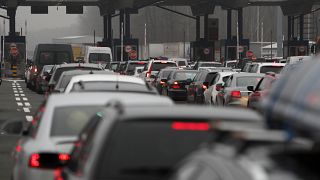 Thousands of European deaths could be avoided if emissions are cut

Tens of thousands of people in European cities die each year as a result of air pollution, according to a new study, which says many of these mortalities can be prevented.

The research, published in The Lancet on Wednesday, has ranked 800 cities across the continent after looking into premature deaths linked to pollutants - and Madrid and Milan top the tables.

It focuses specifically on two toxins: nitrogen dioxide and particulate matter. The former, a gas, is emitted when fossil fuels are burned at high temperatures. This is seen when burning coal, oil, gas or diesel. Particulate matter refers to microscopic particles in the air such as dust, dirt, soot, smoke and liquid droplets.

According to the study, which was led by experts at the Institute for Global Health in Barcelona, around 51,000 deaths from fine particulate matter and 900 from nitrogen oxide could be avoided if nations lowered emissions to those recommended by the World Health Organization (WHO).

Cut emissions even further, and we could save up to 200,000 lives, says lead author Mark Nieuwenhuijsen.

"We know air pollution is bad for you," Nieuwenhuijsen told Euronews on Wednesday. "It can cause premature death; we know it has an impact on your heart, your brain. We also know it can affect a foetus, we know if you are exposed it can reduce cognitive function."

Which cities have the highest preventable deaths?

"Nitrogen dioxide is particularly coming from traffic," said Nieuwenhuijsen. "So what we need to do is reduce motorised traffic in our cities, or make them much cleaner – get electric cars, for example."

Particulate matter, meanwhile, was ranked worst in Milan, Warsaw, Turin, Ostrava (Czech Republic) and Krakow. In these cities, around 12% of natural premature deaths could have been avoided.

Nieuwenhuijsen added: "[This] is partly due to traffic, but also to coal burning, which is quite prevalent in Poland, and in industry in northern Italy."

What about the lowest?

Scandinavian cities dominated the statistics when looking at the lowest numbers for the two pollutants.

Tromso, in Norway, topped both tables, and was followed by Umea, in Sweden; Oulu, in Finland, and Kristiansand, also in Norway.

In fifth place was Pula, Croatia.

Worldwide, around 7 million people die each year as a result of all types of air pollution, according to the WHO. This accounts to one in nine premature deaths and is thought to be related to increased mortality from stroke, heart disease, chronic obstructive pulmonary disease, lung cancer and acute respiratory infections.

Ambient air pollution, which includes smog, results in around 4.2 million deaths a year - and is also closely linked to climate change.

"Many of the drivers of air pollution are also sources of greenhouse gas emissions," the WHO said. "Policies to reduce air pollution, therefore, offer a "win-win" strategy for both climate and health, lowering burden of disease attributable to air pollution, as well as contributing to the near - and long-term mitigation of climate change."

According to Nieuwenhuijsen, the European Green Deal provides some hope for reducing preventable deaths, and says signs of "greening" have already been seen during coronavirus lockdowns.

He said: "We're seeing during the confinement cities implementing cycling lanes. It's important to get people cycling. We need to get people out of the car to get them to cycle or to walk, and that's a really good way forward.