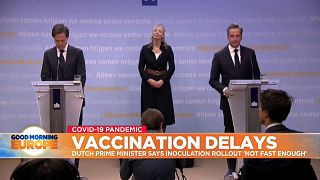 The rise in COVID-19 infections is having major fallout across Europe.

The Dutch government's response is to extend the country's lockdown by three weeks to the end of the first week in February.

Dutch Prime Minister Mark Rutte has said the new UK variant is the reason the why the country is extending measures:

"The numbers are not falling fast enough and we are now also dealing with the threat of the British coronavirus variant. And we are very concerned about this variant. The images from London and also from Ireland are alarming. And that is an understatement."

The alarming rise in cases made UK Home Secretary Priti Patel warn people to play their part and abide by Covid restrictions or the police will enforce the rules:

"If you do not play your part, our selfless police officers, who are out there risking their own lives every day to keep us safe, they will enforce the regulations. And I will back them to do so to protect our NHS and to save lives."

But Ukraine's government is short of vaccination doses and is calling on the European Union for assistance. Last week, 13 EU member states urged Brussels to help the bloc's eastern neighbors vaccinate their populations against the virus.

Meanwhile, hard-hit industries across Europe have inspired protests as continued lockdowns have an increasingly catastrophic effect on jobs and the economy. In Italy hundreds of workers from the country's travel sector gathered in Rome.

"We have had a drop of 100%, my agency has been closed since the 11th of March just like all the other travel agencies. We are talking about tens of tens of thousands of euros less of income, maybe if we put all of us together it is millions of euros in loss," says Vincenzo Macaluso, owner of a travel agency