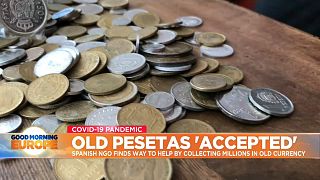 Approximately € 1.6 billion euros worth of Spain's former currency, the Peseta, remains unaccounted for. And as the deadline to convert the currency draws closer, a charity is collecting the cash to help ease a burgeoning poverty crisis, and feed people in Madrid.

The old notes and coins are still convertible currency and now the organisation 'Peseta solidaria' has decided to put it to good use. To donate, all people have to do is sign up on their website. They collect them door to door, change them into Euros and then donate them to food banks.

For Laura Blanco, the organisation's founder, this is a way of giving "a noble and generous end to the peseta", allowing some Spaniards to help others in this time of need. Blanco goes on:

"Despite the crisis, they want to give something to others, and maybe they don't have Euros, but they have Pesetas, and it's a way to help. From a lady who lives in Getafe who had a collection of banknotes that her sister had left for her children, to a man who heard the news, but has no Internet or mail or anything, called the Food Bank and said I have eight kilos of coins, and I want to donate them".

There are still millions worth of euros in pesetas like these in Spanish households. That is why the government has extended the deadline to convert them to euros, from this December to September 2021.

Mila Benito is involved with a food bank that benefits from the scheme:

"These are people who work and are in poverty, which is even worse, because they have such small salaries that they don't make ends meet. Several times I've picked up the phone to people who told me that they used to volunteer at the food bank and help others, and now they call because they need the help. And there is an added problem because we come from the crisis of 2008, so there were no savings left in the families”.

Before the pandemic there were around 350,000 people living in poverty just in the capital Madrid. The Food Bank fears, due to COVID-19, the situation will reach crisis point in January.