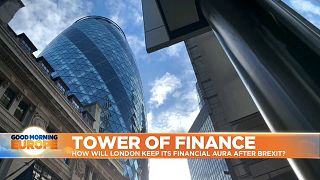 How will Brexit impact London as Europe’s leading financial hub?

While the fishing industry and state subsidy rules are taking centre stage in talks about a post-Brexit trade deal, the future of another vital industry hangs in the balance.

The UK will no longer have the automatic right to sell its financial services across the EU after the transition period ends on December 31.

The industry is hugely important to the UK's financial wellbeing: it made up 6.9% of economic output in 2018.

Experts say many European countries and companies have relied on its financial services expertise over the years.

So, is there another European centre ready to take London's place?

"You don’t build up the kind of infrastructure and ecosystem that we have in London overnight," Professor Barbara Casu, director of Cass Business School's centre for banking research, told Euronews.

"It’s going to take years. The European financial centres, these are still quite small; Frankfurt, Dublin, Paris, they are not really competing.

"The real rivals are New York, Hong Kong and Singapore. Really most of the trade is moving away from Europe and this [Brexit] is a lose-lose situation both for Europe and for the United Kingdom."

London is a one-stop-shop. Not just for financial services.

"If you were purchasing a company somewhere in Europe and you need a bunch of lawyers, bankers, accountants and advisors, you go to London and you get all of the services," said Thomas Wieser, an American-Austrian economist.

"If you have to do that from the continent, you’d say: 'Where do I get the guys who produce my contract? Oh, they’re sitting in London'.

Despite London's status, Brexit has meant firms have transferred €1.3 trillion in assets and 7,500 jobs to the European Union, according to Ernst & Young.

With the transition period ending shortly, the UK can make its own rules for the financial services industry rather than following European ones.

The EU is powerless to stop this, although it could prevent its firms from using services that don't live up to European standards.

So what will the impact be on European firms?

"Big businesses can get finance in New York, they can raise finance in Singapore," said Casu. "The smaller businesses, these are probably going to find it even more difficult to access the kind of liquidity they were used to.

"And if companies can’t access finance, they will not invest and if they can’t invest they will shrink and make people redundant.

**Watch more from Tadhg in the video player, above. **