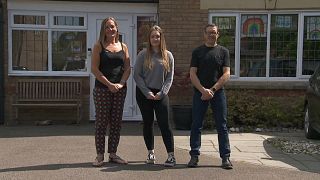 While some have been taking advantage of coronavirus lockdowns to make banana bread or catch up on their cleaning, one British family decided to help scientists hunting for a vaccine – by becoming their human guinea pigs.

The COVID-19 pandemic left Katie Viney, her husband Tony and their daughter Rhiannon locked down at home near Oxford, England. They didn’t want to stand by and do nothing, and they could now go down in health history by all taking part in Britain’s first human trial of a potential vaccine.

"So many other people have been able to do their bit and I just thought, I'm not a nurse, I'm not a trained doctor, so this is the thing I can do," 19-year-old Rhiannon told Euronews.

The Vineys are among more than 1,000 healthy volunteers recruited for the trial, led by the University of Oxford. Half of the participants are getting the prototype vaccine, the others a placebo.

The British government said this week it was pumping more money into such efforts to develop a vaccine, by giving an additional 84 million pounds (€94 million) to the study underway in Oxford as well as toward a separate vaccine trial at Imperial College London.

All participants in the Oxford trial have now received their dose, Business Secretary Alok Sharma said on Sunday. If it proves a success, the government plans to roll out the vaccine to 30 million people by September.

The hope, as with everybody, is that we find that vaccine that could let the world get back to whatever 'normal' becomes.

The Vineys have been regularly taking their temperatures, keeping an eye out for any symptoms.

"We've had absolutely no side effects whatsoever, really, I can't even feel where I've had the injection. And I'm not at all worried, I've got no concerns about having this," said Katie.

"The hope, as with everybody, is that we find that vaccine that could let the world get back to whatever 'normal' becomes," said Tony. "It's really nice to be able to volunteer for something like this, and we feel a bit honoured to be able to do that, truthfully."

What is the vaccine being tested?

The University of Oxford announced in April that it had reached a deal with AstraZeneca that would see the pharmaceutical company manufacture and distribute the vaccine globally.

The vaccine candidate, called ChAdOx1 nCoV-19, is made from a weakened version of a common cold virus that causes infections in chimpanzees, and that was genetically modified so that it cannot develop in humans.

Further genetic material was added to make the spike protein found on the surface of SARS-CoV-2, the virus that causes COVID-19. That spike protein, which binds to receptors on human cells, is believed to play a key role in infecting people with the new coronavirus.

As a whole, the vaccine prototype aims to make the body recognise and develop an immune response to that spike protein, to stop the coronavirus from infecting human cells.

How is it being tested?

Researchers now want to see whether the vaccine triggers an immune response to stop COVID-19 infection – and keep any side effects in check.

Volunteers are given either the coronavirus vaccine candidate or an existing vaccine against meningitis that’s used as a ‘control’ for comparison.

The meningitis vaccine is typically given to teenagers or used as a travel vaccine. The reason for selecting it rather than saline water, for instance, is because scientists expect the coronavirus vaccine to cause some small side effects such as a sore arm, headache and fever. If they used saline, which would cause no such side effects, they fear participants would automatically know whether they were given the new vaccine or the placebo.

"It is critical for this study that participants remain blinded to whether or not they have received the vaccine, as, if they knew, this could affect their health behaviour in the community following vaccination, and may lead to a bias in the results of the study," the university explains.

When will we know whether or not it works?

The trial therefore relies on some participants developing COVID-19. And how quickly they get infected and transmit the disease will influence how quickly the trial will yield results. The team expects to collect enough data within six months at most.

If the results are encouraging, late-stage trials of the vaccine's effectiveness could take place in the second half of this year. That's much faster than usual procedures, which usually take several years.

If the vaccine doesn’t show positive results in the first phase, the university could decide to change dosing or stop the trial altogether.

Getting a vaccine to market usually takes years, not months, and some experts have warned that the magic bullet against COVID-19 may never be found.

With no guarantee of success on a vaccine, Oxford University is also leading what it describes as the world's biggest treatment trial. HIV and anti-malarial drugs, as well as an antibiotic, are among those being tested on COVID-19 patients.

Professor Richard Haynes, who coordinates the Recovery clinical trial at the University of Oxford, says it’s important to continue hunting for effective treatments too, as “some people will end up in hospital even when we have a vaccine.”

“Over the past eight weeks, we've now recruited over 10,000 people from over 180 different hospitals. We're testing lots of different treatments and at the moment it's too early to say whether any of them are beneficial or not. We won't know. But hopefully, we'll get some answers over the summer," he said.

You can also watch Damon's report in the video player above.