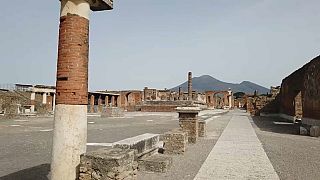 Italian archaeological site Pompeii is set to reopen after months of COVID-19 lockdown – and it will now include previously closed-off areas never seen by the public.

The ancient Roman city was destroyed by the volcanic eruption of Mount Vesuvius nearly 2,000 years ago. Its ruins remained buried under tonnes of ash until they were excavated from the 18th century onwards.

The site – 25 kilometres south of Naples – shut its doors to stop the spread of COVID-19.

The new-look Pompeii will test visitors with temperature cameras and other facilities to ensure their post-lockdown safety. There will now be designated time slots for visitors and one-way paths to maintain social distancing.

And, as Massimo Osanna, the site’s general director says, they will be allowing access to ancient household sites that have never been seen before.

“We will open houses that have never been open to the public," he said. "This is very important.

“The idea was to take advantage of this difficult situation to work for the people and give them a new image of Pompeii: new houses, houses with gardens and open spaces that have been shut for a long time.

“Pompeii does not only represent the identity of this territory, but it represents the European identity."

Ossanna said Pompeii is more significant than ever.

“It’s been so important for the European culture since the 18th century and it must open again to all its citizens.”