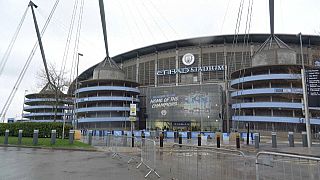 Are disputes over football restart driven by 'naked self-interest'?

English Premier League clubs are to hold a video conference to discuss the latest plans for "Project Restart’’.

Fans all across the nation - and indeed further afield, such is the pull of the English Premier League - are desperate to see the conclusion to the season, but there is more than fulfilling their desires at play.

James Reade, Head of Economics at Reading University, said the current quarrels about the restart are financially-influenced:

“There’s lots of naked self-interest and the owners are quite transparent about that. They don’t want to be relegated from the Premier League, the promised land of all this money - and so we’ve got all this wrangling taking place.”

Clubs have reportedly been told that the use of a limited number of neutral venues is the best option to complete the campaign as this will limit the strain on essential services and discourage gatherings of supporters near stadiums.

There’s lots of naked self-interest and the owners are quite transparent about that. They don’t want to be relegated from the Premier League.

Reade believes the issue of where the teams play is less important from a results point of view if the match takes place with no supporters.

“Teams playing at home won’t necessarily have an advantage if they play behind closed doors. Home advantage is going to be reduced, even if teams play at their own stadiums because the fans aren’t there to influence the referee."

“We’ve done some number-crunching and there’s half a yellow card less for the away team for games played behind closed doors, so it’s going to make a difference (depending on how) the game goes back. The revenue drives everything."

Why would we tune in if there weren’t any relegation consequences of the last few matches of the season?

Reade contends, were it not for TV money, the league may have ended up scrapping relegation and promotion this season:

“The Premier League might well say ‘let’s take the consequences of cancelling relegation this year’ if the TV companies weren’t threatening the hundreds of millions of pounds that come in from television, because why would we tune in if there weren’t any relegation consequences of the last few matches of the season?”

He concluded that the lower leagues are facing quite a different audience problem - gate receipts:

“There isn’t the television money (involved), it’s the gate money and if that can’t come in, there’s very little point putting on the games because all that would happen is you would lose any compensation for the cost of putting on the game because you can’t bring in any fans."