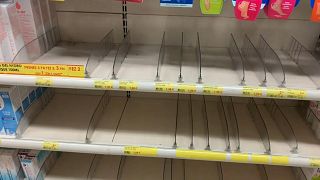 Shoppers in Ireland, France and Germany have complained the handwashing gel is increasingly difficult to find.

At many pharmacies, shoppers are greeted with signs informing them that masks and sanitiser are out of stock.

“Sanitiser would normally cover all four of these shelves – this is Lyon’s biggest pharmacy,” reported Euronews’s Ryan Thompson, during an expedition of supply stocks in the southern French city. “A pharmacist tells me they are completely out for a while.”

Shoppers will get little relief online: face masks have been sold out since the beginning of February. On Amazon, prices of hand sanitiser have been marked up by some sellers to more than €50.

In the US, price gouging has made a litre of hand sanitiser more valuable than a litre of gasoline.

Sales of sanitiser increased by 313.4% during the last week of February, according to data from Nielsen.

Purell, the largest manufacturer of sanitiser in the US, says they've dramatically increased the production since the virus outbreak first began in early January.

However, many doctors say handwashing with soap is a better way to prevent the transmission of coronavirus. Health agencies advise scrubbing the frontside, backside and between fingers with soap and water for at least 20 seconds.

In cases where soap and water aren’t easily available, then hand sanitiser containing at least 60 per cent alcohol should be used.

Texas: 46 migrants found dead in abandoned trailer in one of deadliest US tragedies

VivaTech 2022: From climate to Web3, here’s what to expect