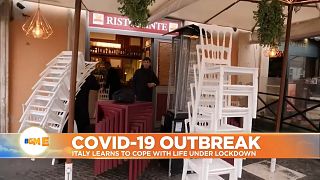 UK is '2 to 3 weeks' behind Italy, says disease control expert

“Every country is at a different phase. If you compare the situation in Italy with the UK, we would suggest the UK is 2 to 3 weeks behind where Italy are in terms of the growth of the cases.”

Dr Michael Tildesley is an expert in infectious disease control and Associate Professor at the University of Warwick in the UK.

Tildesley thinks we are potentially moving from containment to delay mode in the UK:

“That is why these kind of measures are being put into place at this point. What they are trying to do is both delay and reduce the height of the peak.

”It potentially reduces the pressures on health services. The challenge with this is that it might need to be sustained for a significant period of time (to be effective).”

Leaders in Brussels have unveiled a raft of emergency measures to shore up health care systems and help the bloc's economy. Europe has close to 15 thousand confirmed infections and more than 530 deaths with all 27 member states affected. Council President Charles Michel told reporters that the citizens' health is their first priority.

First in line for the emergency funding will be Italy, Europe's worst-affected country. More than 150 people died in the country yesterday, bringing the total number of fatalities above 630. More than 10,000 cases have been confirmed so far in the country. A nationwide emergency quarantine is now in effect as authorities race to stem the epidemic.

See more from Dr Tildesley in the player above.