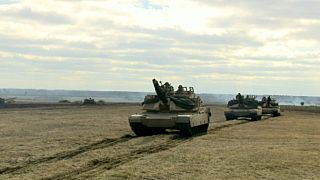 Trump sending 20,000 troops to train with Europeans on Russian border

The United States is deploying its largest number of troops to Europe in more than 25 years.

The training exercises are taking place at a time when NATO is facing criticism on both sides of the Atlantic over its role and effectiveness.

In November, French President Emmanuel Macron described the alliance as brain dead, while US President Donald Trump has criticised European countries for not contributing enough to NATO's budget.

But in a revised show of strength, the United States has agreed to deploy 20,000 service members to join personnel from other NATO member countries including France, Spain, Italy, Germany and the United Kingdom.

Speaking on the deployment, NATO Secretary General Jens Stoltenberg said the large scale exercises were a reminder of the strength of the alliance.

"Defender Europe is the biggest deployment of US troops to Europe in over 25 years and shows the strong US commitment to NATO and to the freedom and security of Europe, "he said.

"Defender Europe is not directed against any particular country. This defensive exercise demonstrates the ability to rapidly move a large force from the United States to Europe to help protect other NATO Allies, if needed."

Not aimed at Moscow

While much of the training will take place along parts of the Russian border, Stoltenberg said the military build up was not about targeting Russia.

"NATO is a defensive alliance and this is a defensive exercise – as the name suggests. We do not seek confrontation with Russia, but the fact is that Russia’s recent activities have reduced stability and security, increased unpredictability, and changed the security environment," he said.

“Our Allies Lithuania, Estonia, and Latvia are marking the 30th anniversary of their freedom. They made the sovereign choice to join NATO and, at their invitation, some of the exercise activity will be held on their territory. Russia has every right to feel secure within its borders, but so do our member states.”