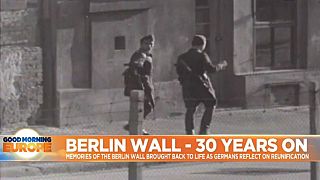 It was the most obvious symbol of the division of Europe after the Second World War. The iron curtain described by Churchill was in fact a concrete barrier. Three and a half meters high. Protected by watchtowers. The scene of numerous attempts to flee communism.

30 years after the fall of the Berlin wall, Germans from all walks of life are coming together this weekend to reflect on the three decades of reunification.

For one man the emotion is particularly strong.

Joachim Rudolph helped build a tunnel under the wall, enabling dozens of East Germans to escape to freedom in the West.

He spoke to Euronews' Good Morning Europe programme. You can see the full interview in the player above.